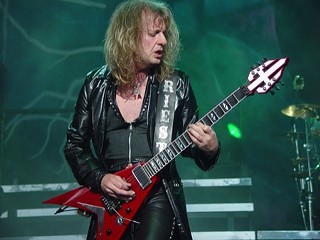 Great metal gristle when Phil Lynott fisted a page of its history in 1983 on final Lizzy studio LP Thunder and Lightning, Judas Priest’s double-disc Nostradamus continues these Brits’ decades-long rampage with the “Revelations” and dire “Prophecy” of the French doomsayer’s predictions for the “Future of Mankind.” At nearly 40, the Priest smote its most ambitious album in Nostradamus, overlong by a platter, but “Conquest” nonetheless. The hot breath of Nostradamus fans August flames in Selma this Sunday alongside Black Sabbath alias Heaven and Hell, Motorhead, and the Bay Area’s early-1980s metal paradigm trendsetters, Testament, at the Verizon Wireless Amphitheater.

“A couple of night ago we actually had the pleasure of playing the same night as Neil Young, which was great – Judas Priest and Neil Young, 72,000 people. The audience loved it, which was great for me, because I’m a secret admirer of Neil. We go back to the Sixties you know.”

K.K. Downing: First and foremost, I guess the whole thing about the Nostradamus concept is that in its entirety, I think it’s fair to say – other than some obviously essential Judas Priest ingredients in there – it’s something we’ve never done before. We’ve never done a fully-fledged, 2-CD, one hour and 40 minutes musical documentation of the trials and tribulations of someone who lived 500 years ago. Everything about the project, really, is pretty much a first for Priest, which is good because we’re a band that likes to evolve and move on with the times. Tonight we’ll be playing music from four decades, and in a couple years, we’ll be entering our fifth. So I just see Judas Priest continuing to do a lot of things – evolve, maybe mature a little, maybe get a little bit more sophisticated. I don’t know. It’s for the listener to decide what they think Judas Priest has become or where we’re going.

AC: What does the band consider its founding year?

KKD: I think the first record was actually made in ’73ish, but obviously the band was around quite a long time trying to get a record contract before then. I guess we’d be having to go back to ’69, really. That was the first time I was in Judas Priest. We’re actually saying it’s our 38th anniversary this year, so in two years it will be our 40th.

AC: The band is from Birmingham, England, originally, correct?

KKD: In and around the suburbs of Birmingham, yeah. I’m from a place called West Bromwich, which is literally about three miles from Birmingham City Center.

AC: Was Birmingham as oppressive a place as it's been made out by Black Sabbath and others?

KKD: Yeah, it was pretty grim. You know, ‘cause it was very industrious. I used to sit and listen to my grandparents tell stories of poverty and, “We never had this” and “We never had that.” Growing up in the Fifties it was the same for us. You never asked for anything, because there was no point. You never got anything. One would have to argue is the world a better place? I forget the statistics now – 20 teenagers being stabbed in London in the last month or two. It’s all getting crazy. It wasn't like that when we were kids, so one would have to argue… If you have to forgo all the toys people have got now, was it a better place?

AC: Is it fair to say that Birmingham’s grim circumstance gave way to the aggressive nature of your music?

KKD: I think something instills in you, doesn’t it really? I’ve got my own little theory. When I was at school, the posh kids – the kids born with a so-called silver spoon in their mouth – they got a car as soon as they were of age. They got everything they wanted. They are the ones more likely to like pop music and be happy. For me, it began when the blues music started to come over from America. As a young kid in the mid-Sixties, I would go and see people like Sonny Terry & Brownie McGhee. And obviously the Kings all came over – Freddie, Albert, B.B. They all came over. That led to a big blues movement, hence the John Mayalls – John Mayall’s Blues Breakers – and blues bands. One thing led to another and I sort of latched onto that kind of thing. It progressed from that into blues, progressive blues, rock, hard rock, heavy rock, heavy metal. You know, the evolution, but I was right there at the beginning - looking for some form of white man’s blues, if you like. Being from an industrious area…. I mean, I guess if we’d have been born in the deep south, we’d have been the cotton pickers compared to the rich kids that were probably swanning around in colonial times.

AC: You mentioned pop. To me, the great metal of the 1970s – Priest, Scorpions UFO – sounds like pop in the face of today’s grindcore and whatnot. Is that a fair statement?

KKD: Yeah, I think so. Pop fans and pop music will always have the upper hand, really, when it comes to getting amount of people spending money on it. That law will always be the case. In different genres of music, I think metal will always be somewhat of a minority, though we gave the industry a good run for its money during the golden Eighties, I think – and the Seventies, really. I think when people actually leave rock and metal and Zeppelin and the Who and Pink Floyd and Judas Priest and Iron Maiden – when they leave that I don’t think they ever go anywhere else. They never go to pop. They may go to maybe a little classical, look at something like that, I don’t know. But in their heart of hearts, they remain rock and metal fans.

I think coming back to Nostradamus, I think the album will twitch those people again, people who’ve left the coup some time ago because of life, marriage, children, jobs, career, whatever – moved on. They’ve become older, lost their hair, whatever – don’t look the part anymore, or feel the part. But they are the part, because once they been a part of it… As I said before, it’s always within us. We’re always going to be fans whatever age or circumstance. It’s just that every now and again, people may need some prompting to say, “Hey, it’s okay to go to a rock or metal concert. It’s okay to go see Judas Priest play and perform Nostradamus, or on the new world tour with Heaven & Hell.” It is okay – come along, bring the kids, bring the nieces and nephews, whatever. It’s a family affair these days. It will always be a healthy situation, but you can always have more and more people in the audience, and more and more people going into record stores again, buying the magazines, reading the articles. A lot of people, I think it’s fair to say, will sit at home and unless they see an advertisement for a band in town, they might not be aware of it since they probably don’t hit the internet sites either these days, you know, their favorite bands. They should start to do it if they don’t and that’s kind of what we advocate.

AC: What I like about Nostradamus is that there are songs, “Prophecy,” “War,” “Pestilence and Plague.” Not exactly pop songs, but you can hear the lyrics, the melody, whereas most of today’s metal is so extreme. It’s a fusillade of sound, but no songs. How can you connect with it if you can’t hum a melody later?

KKD: It’s exactly that. It’s exactly that. People seem to think it’s okay to have left melody behind. A lot of people thought Judas Priest might come back with an even harder, heavier album than the Painkiller album, for example, which is cited as one of our great albums that may well have kick-started all the more aggressive and different extreme style of metal. But obviously Judas Priest thought, “Well no. We’re getting older, we’re moving on.” Like I said before, we like to evolve. We like melody. We do think that it’s a long affair to listen to the whole of Nostradamus. But we think it has long legs because of the melodies and the more the people revisit it, we think those strong melodies will stick in people’s minds and hopefully it’ll bring about a good decent success for us.

AC: Does Judas Priest have a good relationship with the next generation of bands, the Lamb of Gods and so on?

KKD: To be honest, like I said before, hence the Nostradamus album, I must confess maybe I’m getting old or whatever, but there’s a certain point at which I switch off. I can only listen to so many new bands, and it’s either a yes or a no, and it’s kind of an instant decision for me these days. Like I said, I’ve got a long history and I grew up with the evolution of music. I hate to sound old-fashioned, or like my grandmother, but I do turn on or I turn off, and once I turn off, I don’t really revisit. Do you know what I mean? I mean obviously we have a great association with all these great bands that have been influenced by Priest. Out here now we’ve got Max Cavalera’s Conspiracy and we get on great. There will be on these festivals all the black metal, death metal, speed metal, whatever metal. But there has to be a certain amount of good musicianship and a good singer and good melodies for me to think, “That’s great! I want that record by that band.”