I knew Jerry Wexler. That’s no boast. More like incredulity.

Doug Sahm’s death in 1999 shook Austin to its bones. Enough to rouse the great Jerry Wexler. That day he called me at the Chronicle, all of Atlantic Records roared in my ears: Ray Charles, Otis Redding, Aretha Franklin – Jerry’s kids. Led Zeppelin he only signed to the label. The others he left to mankind and beyond.

That I should find myself in one of the five bathrooms at his Long Island home following Sir Doug’s paradise getaway still strikes me as something I saw in a film rather than actually experienced first hand. Whether it was a tiny bathroom with a large photograph of Duane Allman, or the other way around, I swear the spirit of the slide guitar god kept a whisker wired to that water closet. That black and white picture was breathing, and Wexler’s story to go with it stardust.

He called me regularly after that, at home, and mailed me dozens of music news clippings and the occasional CD. To the naked eye, that Moments From This Theatre: Dan Penn & Spooner Oldham Live disc in my library is just another green CD spine. Only I know who sent it. The same guy that hustled me out of his home office with an armful of Atlantic CD sets that he probably produced every track on – Solomon Burke, Wilson Pickett, major swaths of the R&B bible whose genre title he coined.

The last time we spoke was the first days of May. Had I seen the new Texas Monthly, with Willie Nelson on the cover? I hadn’t. He sighed with exasperation, always the educator with too many students and too little time. The clock had been racing at digital rates over the past couple years of our check-ins, always one topic above all others: soundtrack as substance, not embellishment. He’d dug the Ray Wylie Hubbard reciprocation. Los Lonely Boys – stars. Now Willie, Shotgun Willie and Phases & Stages Willie, two more Wexler/Atlantic maps and legends. The great record man couldn’t get enough of the Willie Texas Monthly cover. However many he wanted he’d have, the magazine’s publisher Mike Levy expediting the courtesy of kings. We sent a dozen, and a dozen alum no doubt a lot like me probably got them in the mail soon afterwards. Jerry Wexler sowed music to the last.

Riding Southwest Airlines from Phoenix to Austin on Sunday, KGSR heart and soul Jody Denberg and his wife Barbara filled out my row. Had I seen the news of Wexler’s death the day before? Only just. Jody recounted meeting his East Coast elder here in A-town on the occasion of Lou Ann Barton’s Old Enough in 1982. Introducing himself, Austin’s future air traffic controller pulled out the verbal red carpet. Wexler’s response, one born out of a tiger's desire to get down to the nitty-gritty – soul, music, art – always and with every single breath, titles this thank you. We’ll pass on your lessons Jerry. 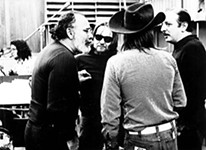 A Man and a Half
Jerry Wexler, 'The Funky Jewish King of Black Music'