A look back at the weekend's rage 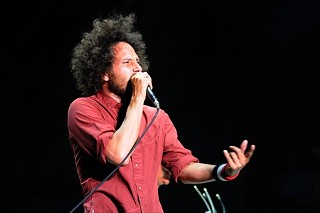 Rage Against the Machine (politely, please) (by Courtesy of Lollapalooza)

There was one glaring omission in OTR’s recap of Lollapalooza 2008: Rage Against the Machine. From the opening charge of “Testify,” the reunited quartet’s headlining set on Saturday night was every bit as polemical and vehement as expected, the sheer power of the band magnified through its seven-year absence. Yet, for circumstances outside of Rage’s control, the show was more frustrating than it was entertaining. The volume was lowered considerably in an attempt to keep patrons from getting too riled up (it didn’t work). Making matters worse, the band had to stop on four separate occasions to ask the audience to calm down and look after each others’ safety, frontman Zach de la Rocha repeatedly pleading for everyone to take multiple steps backward to prevent crushing the people in the front. “Save that shit for the streets,” de la Rocha said after “Bulls on Parade,” referring to where the audience’s real struggle should take place. His cause was already lost.

Reflecting on RATM before South by Southwest 07, guitarist Tom Morello told the Chronicle, “It was music that was designed to rock arenas around the world, and it carried with it a very subversive message.” Yet there was never anything even slightly subversive about Rage Against the Machine. Not since MC5 had a rock band so proudly and loudly displayed its political beliefs. The majority of RATM’s music boils down to two relatively simple and absolutely essential ideas: truth and accountability, and if/when those two concepts fail, rendering justice. The inability of the band’s audience to grasp onto these ideas, often times incorrectly labeling the group as anarchists, was not an effect of the subversive nature of the lyricism, but rather a supreme case of selective hearing. Like dogs that only respond to calls of sit (and bacon), the average RATM fan misses the messages about bigotry and the human stain of supremacy in “Killing in the Name,” identifying instead only with the closing chant of “Fuck you, I won’t do what you tell me.”

During the band’s first reunion gig at Coachella 2007, a circle-jerk of primitive beings attempted to set fire to the grounds after the song “Bombtrack” (sample lyric: “Burn, burn, yes you’re gonna burn”). Never mind the fact that we all would have burned had they been even remotely successful, due to the poor exit strategy at the festival. The point of the music could not have been more fully missed. Of course, this particular incident only involved a few dozen individuals, but it was indicative of tragic irony. The band has crafted the most powerful political music of the past two decades, but, even worse than falling on deaf ears, its audience often times can’t see the forest from the trees and blocks the view for the rest of us. There were other highlights from Lolla worth noting, including the always entertaining Black Lips. Rolling across the stage and spitting all over the place, these four self-proclaimed “Bad Kids” came across like the illegitimate children of Chuck Berry, making a glorious mess out of 1960s pop. The Lips’ antics translated surprisingly well to the main stage.

The Ting Tings craft electro-thrash dance music for the lowest common denominator, like Ghostland Observatory’s first album. The diminishing returns are inevitable, but the duo’s early morning set was energetic and actually quite enjoyable.

The angular post-punk of UK sensation Foals proved even more frantic live than on the band’s Sub Pop debut, Antidotes. The guitars somehow sounded like pins dropping on glass, in a weird Steve Hackett sort of way, and turned on dimes that, when the combined with Afro-beat rhythms and synthetic grooves, gave new meaning to the phrase "dancing about architecture." It was an enticing counterpoint to the 21st century kraut-rock concocted by Battles. Lollapalooza, Rage Against the Machine