Got Down, Stayed Down

Thao Nguyen is so excited 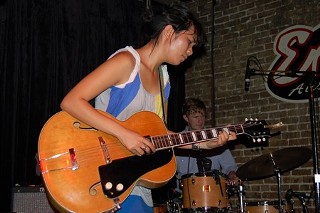 Thao gets down (by Doug Freeman)

Either Thao Nguyen has covertly moved to Austin or the San Francisco via Washington D.C.-based artist has been on constant tour the past six months. The pop prodigy has played more gigs in town recently than most local acts, including opening for Rilo Kiley at Stubb’s. Given the infectious charm of Thao with the Get Down Stay Down’s 2008 sophomore album, We Brave Bee Stings and All (Kill Rock Stars), they’re a band that Austin should love, and judging by the packed Wednesday night crowd inside at Emo’s, the frequent dates have paid off with a devoted Texas following.

Labelmates Horse Feathers, who make their KRS debut with House With No Home next month, set a mellow opening tone, one that deserved a more reverential space than a noisy Emo’s crowd. The Portland, Ore., duo is the latest contribution to the Northwestern folk revival, Justin Ringle’s quiet, moaning vocals set against Peter Broderick’s violin. The haunting melodies quiver somewhere between Will Oldham and Sam Beam, though Ringle’s voice most closely recalls, oddly enough, Tracy Chapman delivered with a rich, morose contemplation. The acoustic guitar and violin arrangements were sparse and subdued, and Ringle’s lyrics unfortunately barely decipherable through his mumbled solemnity, though the songs retained their gorgeous and pleading pull. “Helen” proved brutally beautiful, and “Rude to Rile” lingered with a mournful air. The highlight of the set, however, came with the acoustic rolls and climbing violin of “Albina.”

Horse Feathers provided an odd juxtaposition to Thao’s exuberance, who opened her headlining set stomping the stage in her cowboy boots and leading the crowd in handclaps. Accompanied by only bass and drums, she seemed happily buried in the oblivion of her own enthusiasm, giving the impression that she would have delivered the same energy and joy had no one been in the room. “Geography” burned behind her soulful wail, and “Bag of Hammers” unloaded a funky backbeat that sent her bopping side to side along to her punchy vocals.

There’s a touch of Lykke Li to her stage presence, but less sexualized and more fun, breaking out from behind the microphone with domineering guitar to pound her feet on “Big Kid Table” and banging her strings with a drumstick on “Moped.” Broderick from Horse Feathers joined on violin for “Feet Asleep” but the galloping “Swimming Pools” and rolling jam of “Beat (Health, Life, and Fire)" provided her best moments, before closing the set with “Fear and Convenience.” We Brave Be Stings and All is undoubtedly one of the year’s best pop surprises, and Thao’s live show proves every bit as compelling.