For someone claiming to rap about nothing, Wale (pronounced wah-lay) sure has a lot to say. I first heard the DC rapper when he blasted off on the opening track of 2007’s Daptone Records Remixed, packing in obscure references to Seinfeld characters with cocksure flow. In May, Wale took the concept further, dropping a free download coyly titled Mixtape About Nothing. Stitched together with dialogue from his favorite sitcom, the opening track leans on that distinctive slap bass from the Seinfeld theme as Wale riffs on “what’s the deal?” “If you love substance you love Wale but most niggas love nothing so I made this tape,” he declares.

The son of Nigerian immigrants, Wale recently signed to Interscope and counts hitmaker Mark Ronson as one of his biggest fans and a likely contributor to his eventual major label debut. Ronson calls Wale a mix of Lil Wayne, Lupe Fiasco, and Nas – a bold blend of style and substance. A freestyle over Jay-Z’s Dap-Kings-aided “Roc Boys” beat is murderous. Flowing over a Hova beat inevitably invites comparisons and the DC ambassador stacks up nicely to the King of New York, dropping gems like, “Ya’ll dudes rap like you reading The Source. Wale rap like he read a thesaurus.”

He proves the tape’s title balderdash on “The Kramer,” which begins with Michael Richards’ racist rant and ends with his awkward and unconvincing apology. In the middle Wale dissects the ins and outs of the n-word through the lens of a black child in an all-white school: “A nigga write ‘nigga’ in his lyric / expect the white boy to omit it / the white boy spit it like he spit it / recite it to his friends who by the way ain’t niggas / they say ‘nigga nigga nigga’ my favorite rapper did it…”

Despite some serious content it’s mostly a fun ride. Wale even gets a drop from a giddy Julia Louis-Dreyfus, who shouts out Wale and boasts how cool her kids will think she is for being on a mixtape. Wale’s official debut should be something but in the meantime a Mixtape About Nothing is meaty enough to tide fans over. Download here. 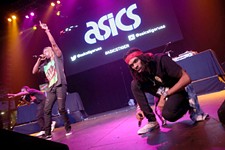