Prompting blasts of horn nudge a band member to the microphone.

“Welcome to the Haunted House,” he laughs. “Yes indeed, we have a live recording session tonight and we’d like for y’all to get in the groove and participate, with all this talking microphones and stuff. We’re going to play funky music all night. Heh-heh.”

That stony chuckle tickles the crowd.

“We’d like for you to be a funky audience all night. So let’s get together and when we get together we’re sure to have a good time.”

A blazing guitar workout preps Temptations smoker “Get Ready,” which segues into a hard line R&B version of the Supremes’ “Come See About Me,” then 11 warts and all minutes of James Brown’s “Papa’s Got a Brand New Bag.” Wilson Pickett (“Mustang Sally”), Sly Stone (“Dance to the Music”), and Jackie Wilson (“Higher and Higher”) follow cover by cover. Willie Bobo’s roiling chitlun feast, “Fried Neck Bones,” and the scream cutting off “Stormy Monday” because “we’re gonna take a brief pause” shut down disc one’s first set. Charles Wright & the Watts 103rd Street Rhythm Band has just snapped every vertebra in the room.

Rhino Handmade’s limited pressings of two Charles Wright double discs, Live at the Haunted House and Puckey Puckey, will also cripple your moneymaker. Signed to Warner Bros. a year after assembling in 1966, this L.A. big band funk unit featured singer/guitarist Wright, guitarist Al McKay (who later founded Earth, Wind & Fire), bass player Melvin Dunlap, drummer James Gadson, plus two saxophonists, two trumpets (one missing from Live), and trombonist Ray Jackson. Beginning as sessionistas cutting a radio theme, the crew became a band when Bill Cosby stumbled onto them at Nashville West studios in Tinseltown and hired them to back him on two music LPs. By ’68, the group was throwing down weekly for Dracula and the Creature from the Black Lagoon.

“The Haunted House was a plush nightclub near the corner of Hollywood and Vine,” explains Wright by phone from his L.A. basin headquarters in Fullerton. “When you first entered the Haunted House, there was a long corridor. On the right-hand side, if I remember correctly, the first thing you saw was a replica of Dracula in action. He’s moving and he’s making Dracula noises. Then there was the Creature from the Black Lagoon. It had all the monsters from the monster movies as you walked down the corridor, from the front door to the belly of the club. Each one of them was animated, doing something to titillate you. At the end of the corridor, there was a little hole in the floor where air would blow lady’s dresses up like the Marilyn Monroe flick. Then you walked into the stage room and it was like the belly of a monster. It was rounded and had all these plush red seats. The stage was a huge monster’s head, with big, bloodshot eyes and big nostrils. His tongue was sticking out and that was the stage.

“If you listen to [Live at the Haunted House], “Knock on Wood” for instance, sometimes when things would get excited, the guy at the door would push a button and the monster’s nostrils would dilate: steam would come out. That was a great place. We worked there two, two and half years, [all week long].”

Haunted's second disc takes its sweet time amongst intros and whatnot, but “Knock on Wood” blows the house down, while a red light, chicken shack cover of “(I’m a) Roadrunner” is unlike any other in existence. By the end of the 79-minute set, Ben E. King’s “Stand By Me” and three-alarm closer of “I Can’t Turn You Lose” have left the Haunted House in charred ash. Puckey Puckey: Jams & Outtakes 1970-1971, after which time the 103rd Street gang disbanded, touches off overhead sprinklers as well.

The 30-minute title tracks sounds like the Meters relocated to South Central, its rubber band rhythm masticated by two guitars, two trombones, tenor sax, and trumpet. At its current run-time, it’s too short by two or three millennia. Universal expansion vibrates at just such elasticity. It’s cessation mimics the earth’s axis grinding to a halt.

“Wait a minute, wait a minute,” someone’s heard to part the Red Sea. “What the hell is going on?”

So much for oneness. Fortunately, “Jam #3” queues next at 23 minutes of hyper funk, and the successive “Jam #2” starts winding the clock at 19 minutes. “Watts Towers” polishes off disc one down at the corner mini mart wrapped in a paper bag. Disc two, besides 20 minutes of “Jam #1” doing the “Cissy Strut” and a four-and-a-half-minute, tighten-up version of “Puckey Puckey,” collects a cherry alternate version of “Express Yourself,” one of two Charles Wright jams along with “Do Your Thing” assured perennial inclusion on any R&B/soul compendium.

Austin Chronicle: I hate that “Puckey Puckey” stops after 30 minutes. The ending’s hilarious, though, with someone – I don’t know if that’s you – exclaiming, “What the hell is going?”

Charles Wright: [Laughs] I was angry that the guys let it go so long on the record!

AC: Did Charles Wright & the 103rd Street Rhythm Band get its due back in the day?

CW: Hell no. No way. I think after the [Watts] riots they thought, “We’re not going to correct this problem. Let’s forget that.” That movement died and my career died with it.

AC: When was that point where you couldn’t get work?

CW: The middle of “Express Yourself” [laughs].

AC: Did you leave music?

CW: I’ve been at it all the time ever since, my brother. I’ve been trying all the time. I can’t quit. I love creating music and I love trying to bring people together, so that’s what I do.

AC: With the Rhino discs does it seem like people are finally paying attention?

CW: It’s strange. Right now I have four commercials on television and another one coming next month on CNN!

AC: They use your music?

CW: Yeah. “Express Yourself” is one of the most sought after songs in the world I think, for television commercials and movies.

AC: Do you still own the rights?

AC: A lot of artists got swindled out of their publishing rights.

CW: A guy called me week before last, wanted to loan me some money on my publishing. I said, “Oh no, I don’t need the money.” Sly Stone – that [publishing] stuff is all tied up and screwed up. George Clinton said, “What happened to you?” I don’t deal like that. I’m not going to sell myself.

AC: It’s time for the reunion tour, playing festivals and getting the brand back out there!

CW: If I had the right agent that’s exactly what I would do. I’m not a spring chicken anymore. I don’t need the money. But I think we should be doing that, especially since they put all this music out there. We should be helping to sell that music.

AC: People are hungry for this music because it's the genuine article and that doesn’t really exist anymore.

CW: Well damn, you’re telling me stuff I don’t even know to be honest with you.

AC: In the digital age, this is what people look for.

CW: I’m amazed. I thank you for telling me this, and I glad it’s that way. It had to come around. Thank God people have come to their senses, because for 30 years this has been missing.

AC: This is what people want, seriously.

CW: I’ve been trying to give it to them all this time, like I say. I hope God keeps enough breath in me to use it.

AC: Charles, how old a gentleman are you?

CW: Too old to talk about it [laughs]. I run four and half miles every two or three days. I try to keep myself in shape. I try to eat right.

AC: Well, we need to get you an agent and get you to some of these festivals.

CW: You know I came down to Austin last year, South by Southwest. Yes I did. They had me booked in the best place there.

CW: It didn’t. I had some bad advice. I went to Austin last year because [some acquaintances] told me, “Man, that’s where you ought to go.” So I bought tickets for my whole band. Then one of these same people called me and said, “No, man. Don’t take a band down there. That’s not what you do. You go down there, you take [pre-recorded] tracks.” I went down there and there were 800 and some odd bandsthere. Everybody had a band, and here I am Charles Wright & the Watts 103rd Street Rhythm Band with tracks. I cancelled the date. I still have the band tickets. 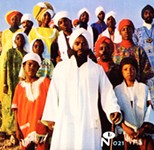