Tracking down every album released by Boris makes finding a needle in a haystack seem like a time (and cost) efficient endeavor. The Japanese trio has released countless recordings through labels on both sides of the Atlantic, from Drag City, Important, and Hydra Head in the U.S. to Japan’s Inoxia, Daymare, and Diwphalanx. Making matters more complex, each pressing differs in some way from the one that preceded it, with changes ranging from subtle (the color of the vinyl, the cover art) to the extreme (the actual track listing).

“In a lot of ways, some of this material is not meant to be readily available,” notes Southern Lord’s Greg Anderson. “Boris looks at music almost as art projects. They need to create and get things out of their system so they can move on to the next idea.”

Thankfully, Boris tours with an incredibly expansive and well-organized merchandise booth, occasionally even carrying albums from White Heaven and the Stars, along with solo efforts from You Ishihara and Michio Kurihara (all of which are worth every penny). As a general frame of reference, the band traditionally identifies itself either as “BORIS,” to signify more song-structured rock & roll albums or as “Boris” and “boris,” to denote more experimental recordings and collaborations. Here’s a guide to the more readily available imports you may come across on Saturday at the Mohawk.*

Flood (2000) A hypnotic and meditative 70-minute tidal movement, comprised largely of impressionistic guitar akin to Michio Kurihara’s Sunset Notes, that ultimately gets washed asunder by a high tide of heavy psych. The ripple effect echoes for 20 minutes of ethereal soundscapes. ***

Boris at Last – Feedbacker (2003) This seamless five-part, 43-minute composition represents Boris’ perfect storm: a foreboding guitar drone beautifully building towards a catastrophic crescendo of Jap-psych that peels the paint like the closing moments of the Beatles’ “Helter Skelter.” The last two movements cipher through the rubble and bask in the afterglow. *** 1/2

Mabuta no Ura soundtrack (2005) Translating roughly to “Backside of the Eyelids,” these 12 cinematic abstractions score only the images conjured by the music: “White Warmth,” “Melting Guitar,” and “The Slow Ripple of a Puddle.” The scenic backdrops adorn some of the most delicate guitar work in Boris’ catalog, recalling a transcendental flight between Brian Eno’s Music for Airports and Pink Floyd’s More soundtrack. *** 1/2 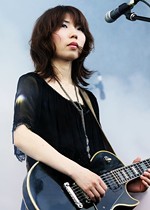