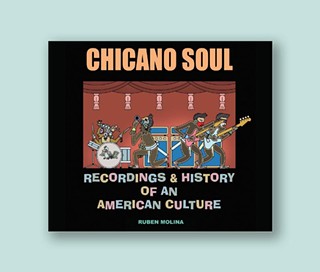 Ruben Molina, the Los Angeles-based author of Chicano Soul, will be at Antone's Records for a book signing at 6pm Friday. Besides being the best book on 1960s/70s Mexican-American rock, Chicano Soul is a landmark publication for filling a gap in popular music history. It is also the first book to detail the way young Mexican-Americans assimilated music and culture after rock & roll took off in the 1950s. Molina also authored The Old Barrio Guide to Lowrider Music, a delightful cruise through car radio-friendly hits of the 1950s-70s.

Chicano Soul is essential reading for anyone with an interest in Texas music, Tejano culture, and 1960s rock. The year’s half over. Buy one for yourself and another for a Christmas present. You won’t be sorry.

Sometime in the summer of 1966, I was forced to stay with my aunt and uncle in what my smug 12-year-old self considered the backwoods town of Brownwood.

Never mind that I learned to set my hair properly in curlers while there. My family was in the process of moving from the culturally fabulous New Orleans, where flambeau torches marched in Mardi Gras parades at the end of my block, to what I was sure was the wasteland of America, San Antonio.

But there in Brownwood was a band called the Midnight Riders, a kind of Paul Revere & the Raiders knock off that sounded wonderful to my preteen ears. It was the highlight of an otherwise grim week. About 11 years later, deep in conversation with Fools guitarist Van Wilks backstage at the Armadillo, I discovered he was from Brownwood and had been in the Midnight Riders.

For those who don’t know, Van Wilks fell in as one of Austin’s favorite guitarists in the 1970s and never left that choice spot. Fools raked in local music awards well before the Chronicle started; by the time our poll got going, he was one of the first Hall of Famers. His lightning fast speed was tempered with steely blues-rock that was all Texas and 100% Van. With very little fanfare, he’s stayed a favorite guitarist of people like ZZ Top’s Billy Gibbons.

I’ve been thinking about Van a great deal recently, since he went public with news about his prostate cancer. That kind of cancer is killing my brother Stephen. When I saw Van at my brother’s fundraiser last month, I reintroduced them. Lucky for Van, he’s at a more treatable stage and a bunch of his buddies are putting together a show to help him, Sunday at Antone's.

Eric Johnson headlines and Carolyn Wonderland, Derek O’Brien, David Grissom, and Dave Sebree round out the bill. The Double Trouble dream team of Chris Layton and Tommy Shannon will be there too, fitting since Tommy was Van’s bassist in Fools during the 1970s.

The show is also billed as a cancer awareness effort, but the shadow of that merciless disease is cast across the music community in musicians from Tina Marsh to Rusty Wier. It’s a reminder that taking care of yourself is more than just important, it’s life or death.

A Browner Shade of Black
Blazing trails of Chicano soul