Del McCoury and friends stick it to the Men

Times are tough. Down the street from my house, traffic was backed up on Duval and 45th in all directions yesterday because the corner convenience store was selling regular unleaded gas for $2.59/gallon. That would have been ludicrous just a few months ago.

Del McCoury feels our pain, though. The bluegrass patriarch recently curated a compilation of hard-time tunes, Moneyland, which will be released in early July. Featuring artists like Merle Haggard, Emmylou Harris, Bruce Hornsby, and Mac Wiseman, the album is equal parts empathetic consolation and political outrage at a government that has left the common folks behind. Bookended by two recordings of FDR Depression-era Fireside Chats, the intent is clear. The politicians may dance around the idea of a recession, using every euphemism other than the truth, but the public knows when to call a spade a spade.

Most scathing is the title track by McCoury. He opens:

“Now it’s a pity to see/When the land of the free/Turns out to be/Nothin’ but a free for all.”

McCoury’s “40 Acres and a Fool” follows suit, if a bit more playfully, castigating the class of new money ranchers that care neither about the job nor the land. He also contributes a bluegrass cover of the Beatles' “When I’m 64,” an odd choice, but set within the context of the other songs, a poignant plea.

Haggard contributes the other prominent voice on the album, balancing McCoury’s string band spite with a more everyman perspective. “What Happened?,” released last year on Hag’s The Bluegrass Sessions, strikes like “Are the Good Times Really Over (I Wish a Buck Was Still Silver)” as he ponders, “What happened, where did America go? Everything Wal-Mart all the time. No more mom and pop five and dimes.”

His duet with Marty Stuart on “Farmer’s Blues” is a powerful lament, and the classic “If We Make It Through December” wrings a new desperation. Haggard’s best contribution to the comp may be the song he actually doesn’t sing, however. “Mama’s Hungry Eyes,” which is here performed by Emmylou Harris and Rodney Crowell, is ripped with ache, recognition of the tough times we’ve been through as we stand on the brink of facing them again.

By far the best song on the album, though, is Patty Loveless’ version of the Darrell Scott coal-mining classic, “You’ll Never Leave Harlan Alive.” The stark banjo and the moaning ache of Loveless’ voice invest the song with a visceral loss. Kentucky native Chris Knight’s “A Train Not Running” falls somewhere between Springsteen and Robert Earl Keen, while bluegrass legends Mac Wiseman and Dan Tyminski offer the medley “I Wonder How the Old Folks Are At Home/ I’d Rather Live by the Side of the Road” and “Carry Me Across the Mountain,” respectively. Bruce Hornsby presents an excellent new version of his “The Way It Is,” which is worth hearing even if it feels a bit stylistically out of place on the album.

Alongside the Fireside Chat samples, the album begins and ends with “Breadline Blues.” Bernard “Slim” Smith’s 1932 version opens the album and a contemporary remake with McCoury, Wiseman, Tim O’Brien, Gillian Welch, and David Rawlings closes. The latter recasts the plea to vote for change into a 2008 setting, and though the political positioning of the album remains ambivalent, the call to address the economic situation remains steadfast. Moneyland isn’t the kind of compilation that would necessarily affect political change, but it’s an important statement for a genre whose populist pull generally leans conservative. 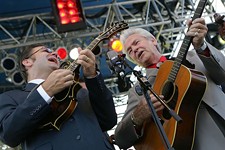