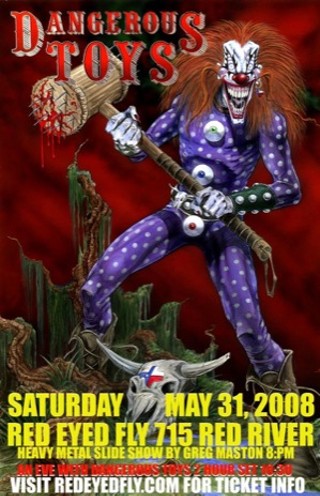 UPDATE: Dangerous Toys bassist Mike Watson was admitted to the hospital on Monday, May 26, and the band has postponed their Saturday show. "We publicly apologize for any inconvenience for travelers coming from out of state to celebrate this show with us," offers Jason McMaster. "We will have to postpone this 20th year celebration of Dangerous Toys until Watson recovers."

“It was wild,” Jason McMaster recalls of the halcyon days of Dangerous Toys. “The band was only Dangerous Toys for six months before we were signed. I was in Watchtower right up until we signed the contract. It was fast and fun. We barely had enough material to make a full record.”

But what a record! Dangerous Toys was an unexpected Texas Southern metal attack on the reigning kings of MTV in 1989 and soon went gold. Singles such as “Scared” and especially the hit “Teas'n, Pleas'n" kept them in video rotation. 1991’s Hellacious Acres followed, then 1994’s less-celebrated Pissed and 1995's The R*tist 4*merly Known as Dangerous Toys. For Jason McMaster, the charismatic vocalist, it was a runaway rollercoaster ride that lost steam not because the music changed but the trends did.

Picking up his Toys once more for the Austin reunion show at the Red Eyed Fly on Saturday, McMaster lined up guitarists Paul Lidel and Scott Dalhover, bassist Mike Watson, and drummer Mike Geary. He also pointed out the Toys’ most famous alumni, Kevin Fowler, toured with them heavily in their later days but never recorded with the band.

But by then, the Toys’ brand of hard rock was passé, swallowed in a sea of flannel and grunge from the Northwest. Like fellow Austin rockers Pariah, the Toys were over before they could get started. That didn’t stop McMaster, still dedicated to the rock steady philosophy, who went on to form KISS cover band SSIK and the award-winning Broken Teeth. So why dabble in the past? McMaster is circumspect.

“They say you have your whole life to write your first record, then you hit the sophomore jinx or you get a deal off the popularity of the Guns ‘n Roses craze, and then a few years later, the Seattle scene cleans out all the shitty glam bands that got the same deal you did.

“I think it was just one of those magical combos of witty lyrics and kick-ass loud guitar riffs that are fun to play, all influenced by the shit we grew up on – 1980s metal and punk. I think being from Texas made us shine a bit harder than some of the other 'Class of '89ers.'"