Five bone-rattling hours worth of the new Live After Death DVD encores with a 15-minute salutation titled “’ello Texas.” Shot at the Alamo, July 1983, during Iron Maiden’s Piece of Mind tour, the featurette cuts between band member interviews and a throttling performance at San Antonio’s hallowed HemisFair Arena, demolished in 1995. “The Trooper,” “Flight of Icarus, “22 Acacia Avenue,” and “Iron Maiden” all execute trademark tales of historical disembowelment with galloping gusto, but it was frontman Bruce Dickinson that caught my ear, saying that the then UK quintet survived outside traditional radio airplay and MTV. Not true. MTV’s skeleton in the closet belongs to Iron Maiden.

Little more than six months separates the debut of MTV, summer 1981, and Maiden’s commercial breakthrough the following March, third LP Number of the Beast. Not only did the fledgling cable channel broadcast the group’s great Indian massacre “Run to the Hills” in regular rotation. I can personally attest that MTV’s summer nights 1982 dripped the sweat and blood of Iron Maiden. Once in bed, 9pm or so, my girlfriend’s parents never descended the stairs until morning. Late night, with a bad case of the munchies, me and my gal zoned out to the station’s overnight programming, which more often than not consisted of entire concerts whiling away the hours. Iron Maiden rammed it home round the clock.

1983 took me to college, where Piece of Mind became instant personal nostalgia. “The Trooper,” best dual guitar harmonies maybe ever, and “Die With Your Boots On” melted my Walkman every time. (Second only to Mastodon covering Thin Lizzy’s “Emerald” early this millennium runs still-missed Delaware trio Zen Guerilla taking no prisoners on “The Trooper” late last decade.) An early promo from my school newspaper came in the still-pined for configuration of a double-vinyl gatefold LP, Live After Death, forever the ultimate Maiden first aid kit: every hit through 1984’s Powerslave, save perhaps for “Sanctuary” from these initial Misfits’ eponymous debut four years earlier. One of my own Animal House moments involves a gravity bong and forced, zealous exposure to the first two Maiden albums, featuring original vocalist/Phantom of the Opera Paul Di’Anno. “Wrathchild.”

Fittingly, the Motor City gunning of “Sanctuary” finishes off the DVD’s 90-minute spandex ballet. Disc two tacks on three one-hour documentaries, including the utterly metal affirming “Behind the Iron Curtain” in 1984. “This is the only thing they got, actually, in Poland” is how a Polish journalist puts it, his soccer team later pitted against Maiden head/bassist Steve Harris’ forward attack and the boys covering “Smoke on the Water” at a Polish wedding. 50 minutes of Rock in Rio ’85 blisters everything else on the Live After Death DVD.

For me, graduating into a record store coincided with 1986’s Somewhere in Time, whose “Wasted Years” immediately caught my eye on last Tuesday’s Somewhere Back in Time – The Best of: 1980-1989. Lacking only “Phantom of the Opera” and sadly including “Can I Play With Madness,” whose Seventh Son of a Seventh Son album-mate “The Evil That Men Do” should’ve remained an only child on the new compilation, this Maiden “introduction,” as attendant press spins it, gets the job done. As, of course, will a now sextet of English blokes on Wednesday when the second leg of the “Somewhere Back in Time World Tour 08” tour kicks off in Selma at the Verizon Wireless Amphitheater, the first in a month of dates in the states before the European summer trek. This is the only thing they got, actually – in Poland, on MTV, over long hot summer nights anywhere. 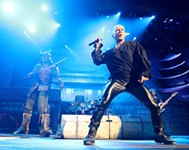