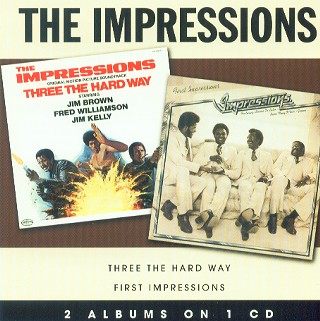 Let’s hear it for American Beat Records, whose have-a-nice-day attitude about the classics reminds us great music didn’t always hit No. 1 and context is crucial in assessing a band’s output. Here are the Impressions, for example, a Chicago-based doo-wop outfit that morphed into the most Motown of the 1960s non-Motown acts, lost their stellar lead vocalists, went on to create notable blaxploitation soundtracks, and became a bellwether for 1970s funk. American Beat collected 10 of the Impressions’ vinyl recordings from 1968-1976 and turned them into five two-fer CDs that track the band from the last recording with Curtis Mayfield through its socially conscious growth.

It’s a remarkable arc, and posits the Impressions as one of the most important if less acknowledged black acts. The velvet-voiced Jerry Butler (“For Your Precious Love”) left the group almost as soon as they formed in the late 1950s and Curtis Mayfield stepped up to the lead. Fred Cash and Sam Gooden soon joined as Mayfield developed into their chief composer with hits like 1961’s “Gypsy Woman.” The Impressions’ personality grew around Mayfield’s acute social vision: “People Get Ready” remains a not-so-subtle call to arms for 1965.

As Marvin Gaye, the Staple Singers, and Motown Records infiltrated the charts with the lush pulse of early funk and politically charged lyrics, so did the Impressions. Their metamorphosis was already in play on 1968’s This Is My Country and 1969’s Young Mods' Forgotten Story. The titles alone tell that story: “Mighty Mighty (Spade and Whitey),” “Choice of Colors,” and “Love’s Happening.” 1970’s Check Out Your Mind!, rich with satin brass and chunky guitar, was less strident and it was Mayfield’s swan song to the band, as he flew solo with the massive “Superfly.”

Check Out Your Mind! is paired with 1972’s Times Have Changed, their first recording without Mayfield, though more than half of his songs populate the album. The title track and “Stop the War” reaffirm their commitment to change as does a righteous cover of “Inner City Blues,” with Cash and Gooden adding Leroy Hutson in the exquisite vocal mix. By 1973 release Preacher Man, Hutson exited and although Mayfield produced, for the first time the Impressions did not record any of his songs on that or 1974's Finally Got Myself Together. By then, Ralph Johnson and Reggie Torian teamed with Cash and Gooden for a return to form and vocal groove that matched the Temptations' silky soul.

Three the Hard Way was the soundtrack for the 1974 film of the same name. Rich Tufo, who’d first written for them on Preacher Man, brought street cred to the band with tough tracks like “Something’s Mighty Mighty Wrong,” despite schlocky filler like “Wendy.” 1975’s First Impressions was also produced by Tufo but Ed Townsend’s propensity for soul lite watered down the overall effect of their still-popping vocals on the title track and corny talking intro of “Sooner or Later.”

Loving Power and It’s About Time, both from 1976, boast string-saturated soul that was vocally solid but lacked the muscle of earlier recordings. Johnson left after Power and Nate Evans stepped in but peer vocal groups like the BeeGees and Isley Brothers were creating the cutting-edge while Al Green was emerging as the sexiest thing in soul since Sam Cooke. Still, the excellent “You’ll Never Find” might have been an outtake from Saturday Night Fever, and had the Impressions been on that landmark soundtrack, their slow fade might have been postponed.

What’s lost in this series is not musical but visual. Today’s CD art dwarfs the power of the album cover. The photo of the Impressions standing amid ghetto rubble on This Is My Country is no Hollywood set; the pre-‘hood look of Finally Got Myself Together is striking; a chocolate beauty sprawled across Loving Power evokes the Ohio Players' classic covers.

By the early 1980s, the Impressions were no longer indelible yet they remained vital. Through this collection, their funk and soul bridged the 1960s and 70s with seamless beauty, and aimed black music’s next double-barrel assault toward the youth of America: disco and rap. It was a shot heard 'round the world and still echoing.

Dr. Lonnie Smith’s B-3 Love Affair
Getting existential with the organ’s greatest suitor