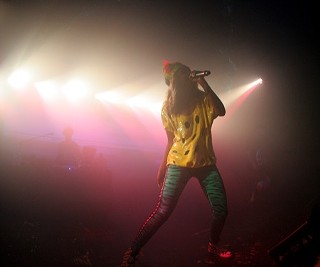 DJ Million turned up the volume 30 minutes after Holy Fuck's instrumental beats drifted off the stage and the opening scripted Asian threat to action subsided, and the crowd went epileptic. It had been a year and a half since Maya Arulpragasam last graced the La Zona Rosa stage – before her soaked Austin City Limits set last year – and in that time, M.I.A. turned the world on its ear with her lyrics steeped in politics, world beats, and revolution. I dare you to find a show steeped in gunshots and air horns as fashionable as M.I.A.'s.

Without question, her sophomore LP, Kala (Interscope), released last year, peeled back the ceiling, tossing out everything from dancehall to Bollywood in one gust. Last night was no different. From the opening burn-up of "Bamboo Banga" to last shoot-out "Paper Planes," M.I.A. owned that crowd. I've never seen so many American Apparel-clad twentysomethings aiming guns into the air with smiles as wide as the Indian Ocean.

The ladies came on stage for "Boyz," the gentlemen followed – or more precisely, mixed – for "Birdflu," and everyone sang along to the Pixies-inflected "20 Dollar." True debut Arular (XL) made a quick showing of "Pull Up the People," but the night was all about M.I.A.'s newest crowing glory. That chick had the crowd wrapped around her little finger, and she was loving every minute of it.

By the time the last encore closed, with M.I.A.'s projections up against the wall, La Zona was a sauna, and everyone was giddy, drenched, and laughing. Proof that shows are still fun, music still effective, and no one has to understand what you're saying on stage to get the message. It was awesome. Click through the gallery to see more from the night.