Steve Earle brings his acoustic tour to the Paramount Theatre Sunday night with new wife Allison Moorer serving the opening set. I caught up with one of Texas’ favorite sons last weekend, while he was getting ready for a show in Charlotte, N.C., to discuss radio, politics, his latest disc, Washington Square Serenade (New West), and his scaled back live show, which now features a DJ. As always, he doesn’t hold back.

Steve Earle: Yeah, I moved over there I guess just over a year ago, because they are just renewing my contract now.

G: I didn’t realize it had been that long since you left Air America.

SE: Yeah, it has. I’ve been following Danny Goldberg around for the last ten years. I left not that long after Danny did. I had a key man clause at Artemis Records and when he left there I left Artemis. And when he left Air America, I stayed a few months longer than he did. One of the problems was that most of us on the weekends weren’t heard, except for the local affiliates. It’s just the state of AM radio, and what happens to local air time is that it becomes basically infomercial time. There were three different times when I was with Air America that I wasn’t even on in New York City.

G: The Air America affiliate here in Austin carried it.

SE: The Austin station was one of the few that carried the whole network for a while. I like doing radio and I was always the least political show, believe it or not, on Air America anyway. There were two music shows, mine and Chuck D’s, when we started out. We were there for musical relief.

G: Is radio something you’ve always been interested in?

SE: Nope. It was totally Danny’s idea back when he was running Artemis. He’s always been pretty good at getting people heard no matter what. It was just one piece of the puzzle when The Revolution Starts Now came out.

G: I thought you always had some interesting guests.

SE: On the new show I don’t do guests mainly because I’ve been touring and it just isn’t really practical. Most of the time I was on Air America, it was the three-year break in touring between the last record and this record.

G: Have you endorsed anyone for President yet?

SE: No, and I probably won't because I’ve discovered the best thing I can do for a candidate I want to see elected is to stay as far as fuck away from them as possible. I’ll vote for whoever the Democratic nominee is. I was never a Nader guy. I’m a socialist who lives in a country with no viable socialist party as far as our Presidential electoral system is concerned. There are other situations, other venues in some places. If I lived in Madison, Wisc., I would vote for some socialist candidate for mayor or city council. That’s happened before. There was a time when that might have been possible in Austin. My guy is actually out of it. The person closest to me was Edwards. He really did understand the way labor fits into everything.

G: How long do you think it’s going to take the country to recover from eight years of the current administration?

SE: It will be our grandchildren who have to overcome that. I mean, Roe v. Wade is probably dead. I wish I had more faith in the Democratic Party to hold the legislative seats that are necessary, but judges are for life. I don’t believe we’re going to be able to maintain gaining the majority that’s pro-choice and keeps this issue out of the courts. Left to the courts, Roe v. Wade is dead. I think the Clintons are Republicans, but he never would have appointed these judges and he probably wouldn’t have attacked Iraq [chuckles]. I’m not totally sure about that, but I don’t think he would have.

G: The show you’re doing now is an acoustic show and you’re playing with a DJ. So, it’s similar to the set you did at Austin City Limits last year.

SE: That was the second time that we did it. It’s evolved from that.

G: How did you come up with the idea of using a DJ behind you?

SE: There are so many artificial beats on the record. That’s what it’s built around. It was really sort of demos that grew up to be the record that I didn’t expect when I started the process. Some of that stuff we overdubbed real drums on; some of it we didn’t. But every single song on it was arrived at by playing acoustic guitar over beats. It was actually John King [of the Dust Brothers] who produced the record. He’s a DJ. It was John who suggested that we do it with turntables. He did it the Triple A convention in Boulder, which was last August just before the record was released and it worked pretty well. So then we did it at Bumbershoot [in Seattle] and ACL and it evolved from there. The show is about half acoustic, half with a DJ, and, of course, Allison is in and out of it as well. It’s turned out to be pretty cool. I’m really proud of it.

G: What is the audience reaction to what you’re doing? Are there people who are yelling for 'Copperhead Road' and are disappointed you’re not up there with loud guitars?

SE: There probably are people like that, but it’s alienated no more people than going out with a bluegrass band did. To keep my core audience interested, I’m going to alienate people who are fans of one component of what I’ve done over 20-some-odd years. It’s just unavoidable. I don’t mean to alienate anybody. I need all the support I can get. Anybody in this business does. But I don’t sell less records than I did 10 years go. I have to be pretty happy with that. At a time when the business is shrinking, I’m doing OK. I’m almost nervous about saying that, but things are pretty much OK.

G: Do you have any new songs?

SE: The only new songs I’ve written, I wrote exclusively for Joan Baez’s record, which I’m producing. ACL was an hour. This is a longer set, more stuff with the DJ, and there’s a lot more solo things I haven’t played in a while.

G: Do think music can have the same impact today that it had in the 1960s?

SE: The same impact how? I think it was really important to us because it was relatively new that pop music became an art form. That was pretty fucking powerful music being made at that time. I don’t think artists take enough responsibility for the demise of the music business.

G: They’re reveling in it, aren’t they?

SE: I don’t give a fuck about the labels going under one way or the other, but why it happened is as much the artist’s fault as it is the label’s. Trust me, there are some artists who don’t have a clue how they’d make a living without a record label. But me, I can busk, dude, and have and will.

G: My question was really more about how the music galvanized that generation and if that’s possible now?

SE: Exactly, and I think that was because the music was better. I mean, I’ll sound like an old fart, but I think music was really vital and it was made for the right reasons. I really believe that no one, not one person, was doing it for money. I think the mainstream music business right now is people who do it for no other reason than money. They do it for the same reason people play sports. They do it for money. 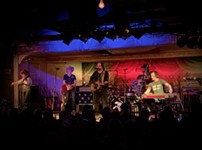 High, Low, and In Between
Steve Earle talks Townes