Crock of Love, Too

Scouring the wreckage of Rock of Love 2. 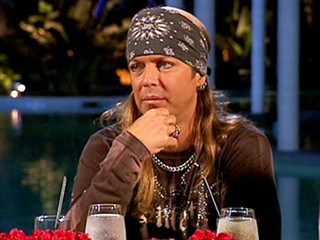 While going to sleep Sunday night, I started worrying about those two stars tattooed on Daisy de la Hoya’s neck. For those of you who weren’t hooked on VH1's Rock of Love 2, Daisy was one of the last two Rockettes standing in the reality show allegedly designed to find love for Poison vocalist Bret Michaels. Daisy didn’t make the cut (“The tour ends here,” he tells the losers) and last night Bret reunited with her and all the season's contenders, including his No. 1 choice who, coincidentally, was also my pick for him.

This is the problem with getting a DVR in the bedroom: recording marginalia. Not an HBO series like John Adams or reruns of The Sopranos. No, it’s those damn-fool reality shows that hook me. Like my vet explained when I told him my dog wasn’t eating her Beneful after I’d fed her steak, “Who’s gonna choose broccoli when there’s Bluebell?”

Bret and I got very close while Rock of Love 2 aired. Though he didn’t return my calls or respond to the reams of advice I had for him in choosing from the gaggle of wannabe rock star arm-candy strippers, in the end he did the right thing. Which meant there was a lot of greasy, sleazy, skankifying behavior leading up to it.

First of all, I loved Kristy Joe, right down to her low-class name. She was a mess and with her unresolved marital situation and Playboy pics, would have been perfect for Bret. She could out-sulk him, and that was a neat trick because it left him so flustered about what to do when someone looked cuter than him pouting. Clearly, he wanted Kristy Joe 40 ways on the floor and, in the end, he didn’t want her tour to end but she chose not to play an encore. The other Rockettes practically popped champagne when Kristy Joe walked out.

Daisy is the stripper niece of boxer Oscar de la Hoya, although it doesn’t seem to have done more for her than suggest she could go a couple of rounds using her personal throw pillows for gloves. Her body is so loaded with collagen, silicone, bleach, and hair extensions (and were those blue contacts?), I kept looking for a plug to pull and watch it ooze out. That and the fact that she was a complete twit. But watching Bret confess to getting hot as Daisy vomited at sea during their big hot boat date wasn’t a new low, it was a great high in cable cheese. But please, PLEASE tell me she brushed her teeth before frenching Bret!

In the end, Bret chose Ambre, the hotheaded Chicago actress/TV host whose bimbo quotient flagged behind the others. Ambre was the dark horse, a determined career woman whose enigma was solved when she admitted playing whoopsy with her age by five years. Yet, that five years bought her tons of cred points, as I told Bret on the VH1 message board. I liked that Ambre had gone after him like a lion stalking prey, though I really want to rearrange the last two letters in her name. Bret agreed, and after many shots of him looking pensive during the final segment, he chose Ambre.

I feel for Bret Michaels, seriously. It’s tough to be an aging rock star. Being the better half of a rock star sucks, too, and rock 'n' roll is littered with the bodies of women who couldn’t handle the all-access pass. Fred LeBlanc of Cowboy Mouth once commented on a cutie who’d sashayed away from him backstage: “She didn’t want me, she wanted to fuck the monster.” In all my years of having been a groupie as well as journalist, it was one of the most salient observations about sex and rock 'n' roll I've heard. Even as the monster on Rock of Love 2, Bret Michaels hoped for love.

Maybe Bret stared at the two stars inked on Daisy’s neck and knew that in 20 years, they’d sag like elephant skin. Maybe he’d had one too many titty dancer girlfriends. Maybe he picked Ambre for the right reasons – although she looked good, she had a life and career of her own and understood the pressure and was clearly head over heels for him. But Bret, I have one last bit of advice.

The headband. Bret, Bret, Bret. The weave looks good so let it flow, babe. Take off the headband. We’ll burn it together and pray for forgiveness. The tour ends here.