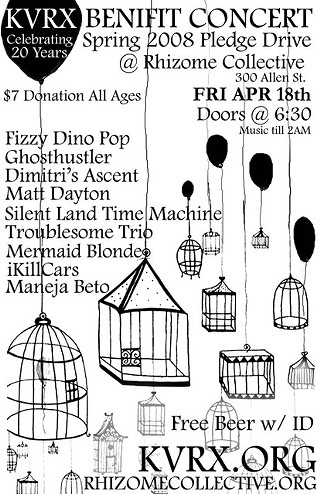 “Good morning out there all you rebels and rounders and welcome to the Southside of the Tracks!”

For about two years, ending last fall, that’s how I began every Thursday morning at 7am on KVRX 91.7. I had a specialty show, which I described as “country, broadly defined.” It was a thrill to constantly discover new and old songs and be able to share them with folks on the radio, one of the highlights of my week.

This weekend, KVRX, the entirely student operated radio station of UT, celebrates its twentieth anniversary. Their unique programming guidelines have made it a nationally respected station and blueprint for many other college frequencies. The station’s slogan, “None of the Hits, All of the Time,” reflects their chartered intention to play music that is not in regular rotation on other radio formats, generally removing from the library any artist that has ever gone gold, graced the cover of Rolling Stone or Spin, or is played regularly on commercial radio. This naturally leads to a lot of inter-staff bickering and compromises, but ensures that the DJs are constantly digging to bring listeners music not being heard anywhere else.

Perhaps the greatest testament to KVRX’s legacy is its alumni, many of whom have continued on in the music industry in one form or another, especially locally. The most famous alum is undoubtedly Spoon frontman Britt Daniel, who worked the boards as a student from 1992-95.

In celebration of the anniversary, we asked some other prominent local graduates in the music business for their favorite KVRX memories.

Austin Powell, Austin Chronicle, host of 101X’s Next Big Thing: “My senior year I co-hosted a show called The Austin Sound. Each week we'd have a different local musician come in and spin some of their favorite Austin artists and, if they were up to the challenge, do a brief acoustic set. There's nothing quite like seeing indie musicians trying to croak out a few songs at eight in the morning, but my favorite show was probably the Lovely Sparrows. Their singer, Shawn Jones, took the whole thing pretty seriously and even brought in a few musicians with him. The whole experience was quite beautiful. I only wish we had figured out a way to record those sessions.”

Erik Wofford, producer, Cacophony Recorders: “I'd have to say one of my favorite memories of KVRX is recording a solo acoustic set with Jim James of My Morning Jacket. We did the session in an old radiology room back behind the station. It had tile floors and walls so it was basically a little reverb chamber. Jim loved it. The way he played with the reverb time was pretty magical. He said it was the best recording he's ever had of his solo material. Lucky lady Rosa Madriz was the sole audience member of that private concert with him. You can hear one of the tracks on the [Local Live] Vol. 5 CD. Another favorite experience was being the engineer on the very first Explosions in the Sky show, which was a Local Live taping on the Fourth of July. They were called Breaker Morant up to that point and had never played a show. After sitting outside watching the fireworks afterwards, they decided to call themselves Explosions in the Sky. I basically was the first person to ever see that band.

Rosa Madriz, booker/manager, Green Potato Ventures: “Number one, my radio show. It was on Wednesday nights from 11pm-1am and my best friend [Zafar Shah, another KVRX veteran] and I co-hosted the show, *sad*robots*don't*cry. We played what we called "sad robot music." I loved doing that show with him. The absolute highlight (to this day) was the intro we made up for the show. Zafar wrote out this storyline about robots that were sent out to space by the Reagan administration to be destroyed. A few robots survived but were separated, and one robot (the subject of our show, Robot 7) was on an endless search for his mate, Robot 6. I still listen to that intro when I come across the CD that has it on there.

”Number two, Local Live. When I started volunteering at KVRX I thought I would learn how to do live sound and production. I never quite picked it up, but for the four years I was there, even as station manager, I volunteered with Local Live because I loved being on a more personal level with all the bands that came through. And I really got a kick out of booking some of the bands that came through (first taste in booking) and knowing which local bands were new. I got to meet all the dudes from My Morning Jacket when they were playing to eight people at Room 710. I got to sit alone in an old abandoned health center room with Jim James while he recorded a four-five song solo set. Amazing! And I nearly had a heart attack when, for a moment, I was going to give Sam Prekop and Archer Prewitt a ride back to their hotel in my old hatchback Mustang!”

Chris Gregory, Golden Bear: “I think my fondest memories from KVRX would be playing on the intramural floor hockey team, the Vixens. It was just a bunch of un-athletic music freaks running around Gregory Gym pretending to play hockey. I think our moment of glory was the time we almost didn't get beat. Also, Golden Bear probably would never have happened without KVRX, as we (Jamie, original drummer Andy, and Brent) all met on my old show. So that is a pretty good memory too. I remember being genuinely slightly afraid of Brent.”

John Gross, Partyends.com/Artifact Workshop: “Most of my favorite memories are too silly or pointless to merit printing (lengthy conversations about sub-sub-sub-genres of music, crazy late night/early morning callers) so my legitimate answer is that the station was an amazing device to see some of my favorite performers up close and personal via the power of radio. I got to see many of the bands I still LOVE today (Astronautalis, the Paperchase, Smog, etc.) do an essentially private set via the ruse of a Local Live recording.”

Chris Rose, Car Stereo (Wars): When you start out at KVRX, they usually stick you with a really crazy middle-of- the-night slot. My first one was 3am-5am, and sometimes the 5am-7am people wouldn't show up so you would just have to keep playing. I remember one night I found out I was going to have to go from 3am-8am or something really ridiculous like that. After about three or four hours, I just started picking out Sigur Rós and Godspeed You! Black Emperor songs that were like 15 minutes long and I would set my alarm on my phone for every 15 minutes and just take naps while the songs played. Also, I think there was a whole lot of asbestos in that basement, and then right after I left they tore the building down. KVRX was, for sure, my favorite part of college. I wanted to be as cool as Christian Slater in Pump Up the Volume. Or Mr. Belding in that one episode of Saved by the Bell.