If ever a group was perfectly synchronized to the cacophonous acoustics of the new Austin Music Hall, the Mars Volta is it. The touring octet models that particular Mark of Zorro like both the Mexican flag across its amps last night and the one held aloft stage front by a surging crush of human sardines on the venue’s floor.

Of course when the Mars Volta last landed on the Music Hall – April 2005 – the same muddle of bottled lightning ricocheted inside the building’s metallic bowels. Cedric Bixler Zavala and his paper thin partner in black Omar Rodriguez Lopez stoked a demon charanga of gargantuan proportions. Three years ago, the cause given was beast of burden Frances the Mute. Now, it’s Holy War The Bedlam in Goliath. Previously, the band’s power line guitarrorism cut slightly sharper and clearer in the Music Hall’s square box. Up in the new revamp’s also teeming bleachers, the only clearly audible instrument was the stage left horn man blowing hurricane gales on flute and saxophones tenor and soprano. The near sellout clamored his due.

Santana invented nuclear Latin boogie at Woodstock and the Mars Volta destabilizes its compartmentalized meter with MC5 punk fury. A decade ago at Emo’s, TMV mothership At the Drive-In compressed this alternate power source into tighter, denser reactor rods. In the present, ATDI’s primary spin-off ratchets up its untamed combustion to levels well off the charts. Singer and guitarist have tapped into a breathtaking musical force of nature that electrocutes the Q-Tip axe man and funkifies the poodle-cut frontman, who executed handstands, flying leaps off the bass drum, and mic stand baton twirls. You couldn’t make out a single syllable of Bixler Zavala’s nasal screech, but he looked like James Motherfucking Brown doing it.

After 90 minutes, Off the Record and I had seen enough, The Bedlam in Goliath melting into a single sonic wave where only “Ilyena” and “Goliath” sounded out above the fray. On disc, TMV’s diminishing returns began after 2002 debut the Tremulant EP. Live, they “Kick Out the Jams” like no other au currant, recognizable anthems be damned. 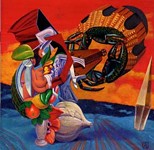