A roots label goes under; a Geezer cries

A couple of weeks before South by Southwest, the news came in that a part of Texas had died and no one really noticed. Although HighTone Records was headquartered in Oakland, Calif., its impact and support of Texas musicians was immeasurable.

The label began in 1983 with the release of Robert Cray’s Bad Influence. A surprise hit, it set the course for close to 300 other discs. HighTone put out some of the best work of local faves like Jimmie Dale Gilmore, Joe Ely, and Dale Watson. It brought worldwide attention to the likes of retro-swingers Big Sandy & His Fly-Rite Boys (whose Continental Club shows had to be experienced to be believed) and the astonishing talents of songwriter/guitarist Buddy Miller. Under their influence the careers of Dave Alvin and Tom Russell flourished.

An attempt to reach Larry Sloven, who started the label along with producer Bruce Bromberg and who missed his first SXSW this year, went unanswered. But Darrell Anderson, a label fixture for twenty years who was the promotion guy but wore many different hats over the years, responded via email:

“I'm proud of my twenty years with HighTone. In that time, we made some of my favorite records. When I started, there were very few labels doing what we did. Now look at it, there are almost more labels than consumers! I got to meet a lot of great people, artists, managers, booking agents, and lots of writers and radio people who are my friends to this day.

One of the first things I did when I got to HighTone was to naively work Jimmie Dale Gilmore to country radio. I really couldn't believe the first time one of them told me he was too country. It was only funny the first time.

Hell, I haven't even touched on the blues side of things, and the Testament Label reissues that we did along with the High Water Company out of Memphis. They were some of the best blues releases out there, not to mention a little thing like starting the careers of Robert Cray and Joe Louis Walker. Hey, wait! What about the weird little side projects? The dancehall reggae series, or the two terrific but completely ignored power pop records by AstroPuppees? THE BLASTERS!! Oh, wait ... uh, Laurie Lewis! Love her too. Oh, you know, the list goes on & on.

It was really a pleasure to work with them all, knowing that the records we put out were the records they wanted to make.”

It’s a sign of the times. Record labels like HighTone just aren’t necessary these days and even the big labels are searching for ways to survive in the Digital Age. Still, what the little indie from Oakland accomplished will never be repeated. 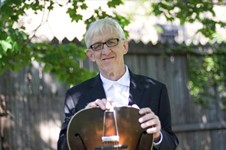