Doin' the splits with a lost soul singer

In only his third performance in the last 30 years, Darondo Pulliam, 61, shimmied across the stage at Club de Ville, repeatedly falling to his knees and offering X-rated love-making tips involving whipped cream and hot cherries (“but not too hot”). I shouldn’t have been surprised.

“One thing I always could do was dance,” the lost soul singer proclaimed in our interview a few weeks before South by Southwest. “I’m just resting up so that when I get out there I can get my dancing on.” Darondo cut three incredible 7-inch singles in the early 1970s and promptly left music in his rearview mirror, spending the rest of the decade cruising Bay Area boulevards in his custom Rolls Royce. His flashy ride and gold jewelry earned him a reputation – he’s long rumored to have earned his living as a pimp, a charge he denies.

In the late 1970s and early 1980s Darondo starred on several Bay Area cable television shows before disappearing all together. His rare 1973 single, “Didn’t I,” was included on a 2005 compilation by British DJ Giles Peterson, which eventually led to the 2006 release of Let My People Go, a compilation of Darondo’s known recordings on Ubiquity Records. In a most entertaining interview, a chatty Darondo speaks on dressing up like a woman, cooking hamburgers on the way to Reno, and how a Charlton Heston line debunks those pesky pimp rumors.

Bump & Hustle: You were friends with Sly Stone back in those days, right?
Darondo Pulliam: Yeah, brother Sly. He had a private studio and it was laid out. At the time I was with some fellas called Willie & the Wild Bunch. They were his protégés and were trying to be just like him with the clothes and everything. At that time I had the Rolls Royce and I had parked the Rolls right by the door. Sly came through there and pulled up behind me and blocked me in so I couldn’t get out because he didn’t know whose car it was. So Sly comes up in the studio and says, 'Whose car is that out there?' I say, 'Who wants to know?' Me and Sly got to cutting up and talking to each other. He said, 'Give me the keys because I’m fitting to take it down!' He had me laughing. Sly was something else!

B&H: That car earned you a nickname as well, didn’t it?
DP: Yeah, they used to call me 'Rolls Royce Darondo'! At that time people were buying Mercedes Benz and Cadillacs but I didn’t want neither one of them cause my stroke is all the way different. I met some folks in Modesto who owned a club called The Godfather. He had a big car lot and across the street a warehouse with nothing but Rolls Royces. He said, 'Darondo, come here, I want to sell you one right now.' I said, 'I can’t afford no Rolls Royce.' He said, 'Yeah you can, you’re my man. Don’t even worry about it, I’ll take care of everything.'

The next thing I know I drove out of the lot in a Rolls Royce with a steering wheel on the right hand side cause it was right off the boat from London. It was all the way white with a Bradley conversion kit in it. When you lift up the trunk a picnic table pulled out and you could cook in the front of the car because it had a hot plate. You could make coffee or tea or whatever; if you wanted to cook you a hamburger you could. I’d drive to Reno and I’d be cooking hamburgers right there in the car. You’d push another button and a bar would come out. Another button would bring out all the ladies’ perfume and all that. It had a police scanner so if the police pulled up behind me I could hear everything they were saying. It’s the truth - this car had everything in it. This was the 007 car. It was too cold, I had so much fun in that car. I was up in Reno and met Frank Sinatra because of that car. I had parked the car when Frank Sinatra and his entourage came through there and Frank said, 'Man, look at this here. Is this yours?' I said, 'Yeah.' He said, 'Boy, you got something there!' and he kept on stepping. Old Blue Eyes saw the car and liked it. That car was definitely an eye-catcher. It got me in a bunch of little adventures. There’s a story behind that car, I’m telling you!

B&H: I’m sure there are lots of stories behind that car.
DP: Yeah, they tried to tell me I was pimp. But that was simply because of the way I was dressing and this and that. I wasn’t none of them things, I just knew everybody. I was just charismatic – I knew doctors, lawyers, I even knew the mayor. When people saw me they classified me as that but I just knew everybody. Girls would just run up to me sometimes and try to give me some money. I said they got to be crazy, but I’ll take it. I was with my partner – he was a pimp – and I said, 'What’s up with these girls?' He said, 'She’s trying to choose you, Darondo.' I said, 'Choose me for what?' He said, 'That’s what they do out here in the game. If a girl gives you some money they want to be in your…' I said, 'Man, I’m married! I ain’t got no time to be messing around out here.' But I knew everybody. I was just having a lot of fun but everywhere I went they labeled me as a very fast person.

B&H: A very fast person?
DP: Well, I was very fast but I wasn’t in that line of work. I’d do a whole lot of different things. I would go into the club and buy everybody a drink but that was just me doing my own public relations. And I loved jewelry at the time so I had a ring made up, the Darondo Special. I went to St. Thomas and they thought I was Little Richard. This woman took me in the back room and sold me a gold stone ring that comes from South Africa. It’s a gold ring with a gold stone in it and some gold dust in the stone. It’s very rare. They don’t even make them no more.

B&H: So all the rumors out there about you being a pimp in the 1970s are nothing but hearsay?
DP: That ain’t nothing but a myth. Charlton Heston in The Ten Commandments said, 'If it’s a myth bring it to me in a bottle, and if it’s true bring him to me in chains.' I ain’t never been in no chains so it’s got to be a myth!

B&H: Let’s talk about how you got into television.
DP: I got into television when a brother from KDIA wanted me to do a video for this program called Soul Beat for the song 'Legs.' I went out there for the video and we were laughing and cutting up and the man from the cable station said, 'You need to be on TV.' I said, 'Man, you must be crazy!' That’s when cable first came out so I went down there and the guy asked me to do a promo for a show. I got some fine young ladies and went to my house out there in Oakland – they called it the Penthouse because it was overlooking the whole Bay Area – and I set it up and started playing videos I got from all the record companies. So at night I had a lot of fine women and champagne and had the place laid out. I’d talk to the crowd for a minute and then I’d play some videos. They put that on the air and the next thing you know they said everybody everywhere was watching this program. After that I got to doing comedy shows and different stuff. I had a bona fide audience! I stayed on there for about five years doing videos, comedy shows, I even dressed up like a woman! It was like what Flip Wilson was doing. We were just having so much fun it was pitiful!

B&H: Tell me about the children’s show.
DP: Tapper the Rabbit, that’s right. I had to dress up like a rabbit, we had a ventriloquist with a dummy and he was really good. I mean this dummy could sing! You couldn’t even tell he was doing nothing, he was that good. We had the downstairs set up almost like Barney or something like that and we’d have the kids come over there. You almost wanted to cry because of how much fun these kids were having. Now that was fun right there.

B&H: Now Darondo is back. People know your music and seem to like it. How does that feel?
DP: It seems like I went into The Twilight Zone, I’m telling you. I don’t know. It looks to me like I’m in outer space with the aliens, like somebody picked my ass up and took me into space and did something with me and brought me back to Earth. I don’t know what’s going on, I just know I’m having plenty of fun. It just doesn’t seem real.

B&H: How many times have you performed since your music has been rediscovered and reissued?
DP: Just one time at the Rickshaw [Stop, in San Francisco]. I went out to the Rickshaw and when I opened the door and came out on that stage there were people from the front door all the way to the back door, all upstairs and everywhere. I said, 'Man, I can’t believe all these people came out here to see me sing!' I hadn’t performed in 30 years and when I got to that curtain I said, ‘Well, Darondo, you can’t go back and turn around, you got to come out on stage.’ So I went out there and the next thing you know I was kicking and it looked like I had gone back in time or something. I flashed back about 30 years, brother! I saw the women and started talking that pimp talk. Now, I was never a pimp, but you know what I’m talking about. It was out of sight! I was feeling so good I messed around and forgot how old I was and did the splits! 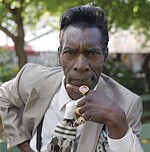 Spotlight: Darondo
Darondo: not a pimp, not a myth