Daniel Lanois and the Improbabilities of Sound

Daniel Lanois is missing. It’s Tuesday before the start of SXSW, and Lanois’ manager is standing uneasily outside the Hyatt Regency just south of Town Lake. Lanois left the hotel in a fury, the construction going on below his room interfering with tuning his pedal steel guitar.

“He’s a little sensitive to sound,” says his manager by way of apology. For one of the greatest producers of our time, whose credits include Grammy-winning albums by Bob Dylan (Time Out of Mind), Emmylou Harris (Wrecking Ball), and collaborations with Brian Eno, “sensitive to sound” is an understatement.

Lanois arrives still seething, slamming the cab door and marching, jaw clenched, around to the back of the hotel. The back of the hotel is similarly rife with construction, and Lanois scans the area. He finally spies a grassy knoll to the side of the bike trail and seats himself in the grass, his characteristic black leather jacket glinting in the bright sunlight. He pulls out his guitar and begins to strum each chord slowly, visibly assuaging his anger.

Returning to SXSW for his first time since keynoting the music festival in 2003, Lanois comes bearing both a new album and documentary, the latter having debuted two days earlier at the SXSW Film festival. Both are titled Here Is What Is and capture Lanois’ production work and songwriting throughout his career, spackled together by philosophical conversations with Eno about sound, life, and art.

“As I watch it now, I realize there are definitely some magic moments beyond the usual sort of thing you get from a documentary,” says Lanois of the film. “A documentary may be informative, but I think in this case we have what I call ‘lift-off’ a few times, where you have the molecules fall in place and there’s just something special about it. There had also just not been a lot of footage of me working in the studio before.”

Lanois’ famed production career began in his mother’s basement, where he recorded artists with his brother before he was a teenager. Though he is responsible for helping shape some of the past quarter-century’s most influential albums, Lanois still considers those early years in the makeshift studio some of his proudest and most productive.

“There are the sort of obvious points with Eno and U2 and all that, and everybody knows all those stories," Lanois says, "but those years between like 12 and 17, those are amazing learning years, and I was already in the recording studio recording great people through all those years. I think in regards to my skills and what I was exposed to, which allowed me to pick up as much information as I could and get good at what I was doing, that all happened much earlier. I was working with some really great people when I was a teenager in my mom’s studio.

“I made hundreds of albums with gospel quartets, singers that were on tour through Canada, and I can remember groups from all over the world – one from Haiti that was fantastic,” he continues. “When you get to hear that kind of quartet singing as a young kid, that kind of exposure to harmonic structure, the kind of stuff you might think you have to go to school to learn, I was exposed to it in the studio. They were not famous bands, but they were very much at the top of their thing. I think that these were great learning opportunities for me, and I was exposed to song and song structure and I didn’t have to struggle to be associated with quality. It was all very much right there in front of me.”

Lanois’ reflections upon his career are precipitated not only by the documentary, but also his returning to the studio with Eno to produce U2’s new album, set for release this fall. Having arrived in Austin fresh from recording with the band in Dublin, Lanois acknowledges that the album serves as an interesting marker for how technology and his production philosophy have both changed and remained constant over the years.

“We’re using a new medium now, but the tools are the same, the source tools,” he says. “It’s still guitars and keyboards and bass. Eno has moved on to a computer this time, but I have to say, I miss how we used to have these cheap monophonic synthesizers that promoted kind of a lead synthesizer-playing performance out of him; you could only ever play one note at a time and they were really nasty sounds, but great ones. We referenced the new Nick Cave record the other night back in Dublin, and there was a keyboard sound on there that was fantastic, that reminded me of one of Eno’s old monophonic sounds.

“The approach hasn’t changed that much, though,” he continues. “We just build on top of things that we already have a liking for. We’ve had a lot of jam sessions so far, so the songs that we’re chasing are a result of the jam sessions, and they already have very strong beginnings and their sonic identity. So it’s just trying to make improvements on top of something that we already trust in the beginning. They’re not fully finished songs because Bono likes to leave himself that flexibility and he’s very responsive to the content of tracks, and the Edge might come up with a last minute guitar cut that inspires him to strike a new melody, so that part of things is still the same. We’re using a computer-based recorder and we’re going to mix from Pro Tools because we want to use an automated console. They want to be able to recall mixes because the vocals usually change right up to the last minute.

Lanois has been quick to embrace and explore new technologies, a position that sets him in contrast to many audiophiles. He recently created the online label Red Floor Records to digitally re-release the entire catalog of his own work, which includes the acclaimed albums Acadie and Shine. The albums are available in high quality wav format as well as standard mp3 for the same price, and he is proud to note that over 70 percent of the downloads have been for higher quality versions. Lanois also wants to release miscellaneous material through the online label, including a long-planned instrumental album of just pedal steel.

“It seems to take on a life of its own,” he says of his love for the instrument. “It resonates its own harmonics and then I respond to play on top of them. And I don’t use effects or anything, and I just kind of keep it dry. I’ve refined my tuning, and I struggle constantly with the harmonic interplay, and that’s really the only way I can describe it, in the same way a well-arranged quartet has that feeling of being in harmony, the steel guitar has that.

“If I’ve got my volume up nice and loud and I shake it in a quiet way, all these harmonics happen and I love to hear it,” Lanois says, staring out at the water and sun reflecting back under the Congress Bridge. “It’s not unlike the shimmering of the light underneath that bridge. You couldn’t explain exactly how it’s being made, it’s obviously a complexity of reflections, and a lot of people would drive and not even see that that was happening, but I love that kind of detail that nature brings our way. And I think harmonic play is one of nature’s gifts.” 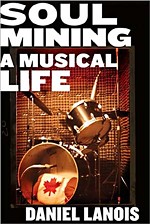