Justice rebounds from its FabricLive rejection

By some sort of weird cosmic switcheroo, Stubb’s Justice show on Monday, March 3, still isn’t sold out, but tonight’s NOFX show, Saturday’s Citizen Cope show, and next Friday’s Dropkick Murphys shows all are. If that’s not a sign of the corrupt world we live in, I’m just not sure what is. I’m not saying Justice is the best thing to happen to house music since Paul Oakenfold, and sure, those $25 tickets are a bit steep, but come on people! Hasn’t everyone in the free world already experienced a NOFX show?

Gaspard Augé and Xavier de Rosney, the two DJs behind Paris' Grammy-nominated Justice, have divulged into silly season themselves on at least one occasion – the addictive “D.A.N.C.E.” from Justice’s sole LP, †, had a little cameo in the ridiculous movie Meet the Spartans – and sometimes that wacky sense of humor transfers into their selection of remixes and set lists. The rejected FabricLive set that’s been widely reported on and finally leaked as the Justice Xmas Mix included everything from Chic to the Fucking Champs to Todd Rundgren. House music + disco + singer-songwriter. That might be construed as silly.

That also might be one reason why Fabric rejected the set for distribution. For those unfamiliar, Fabric is an über-famous London night club and record label fond of putting the big wigs in the DJ booth. In addition to the albums released on the Fabric label, the club puts out a series of live discs – FabricLive – at the rate of about one every other month. They’re some busy Brits.

If dance music truly is the new medium, as vinyl splits time evenly between acoustic guitar and laptops, then Justice’s creativity is a water mark of the modern age. They’re not revolutionary, or even that thought-provoking, but dammit, they’re fun to dance to.

Dallas superblog Gorilla vs. Bear (www.gorillavsbear.blogspot.com) – one of the best in the business, in our humble opinion – posted the set list and the full MP3 download, so you be the judge. Is Justice all its cracked up to be, or is this scale broken?

The set list from Gorilla vs. Bear (via Urb): 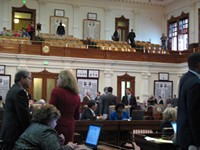