Somebody Get Me a Shot

The Who at the Oakland Coliseum, on the Face Dances tour – first since Keith Moon's death – no go. I begged and pleaded with my parents, but nada. I was remanded to their custody.

By September, I’d turned 15, so the Cars at the same venue, Panorama tour, remains my first. Two Fridays later, Van Halen's Women and Children First trek returned me to the scene of the crime. They were good, but the spectacle was basketball arena bluster more than anything else and we knew it. David Lee Roth, in leather bell bottoms and little else, swigged from a bottle of Jack Daniels obviously filled with Coca-Cola – one fizzes a lot more than the other – and pretended he was drunk. Talk about obnoxious.

Like it was this rainy morning, I remember Steve and I staring at each other across his sunken living room when both the band’s eponymous 1978 debut and its successor the following year, Van Halen II, bowed on the stereo at window-rattling volume. Maybe there was air guitar even, and not from Steve. He was the brains of the outfit. We gotten my money's worth, good records – “records,” 12-inch vinyl albums. Nuclear energy was still novel then so the Pasadena quartet infusing the Kinks “You Really Got Me” with no small amount of it gave them credibility. “Ain’t Talkin’ Bout Love,” instant classic.

“Ain’t Talkin’ Bout Love” never really moved past foreplay last night at the AT&T Center in San Antonio, and I don’t mean Boston (“Foreplay”). The Van Halen of almost 30 years later couldn’t quite hold to the song’s melodic through, which then also held true for “Little Guitars” next. “Ain’t Talkin’ Bout Love” humped-n-bumped worlds better in 1980, as did Ray and Dave Davies’ riff rocket “You Really Got Me.” Little else did, however.

“Three-quarters original,” announced Roth halfway through Thursday night’s two-hour basketball arena blowback, meaning himself and the Van Halen brothers, Alex on drums and Eddie the younger on Joker-encrusted grin and guitar. “One quarter inevitable.” That would be Eddie’s big teenage atomic punk Wolfgang on bass. His set-list, that of a hardcore fanboy, included not one single extraneous track in Van Halen’s no frills return. Twenty-seven years ago, the band only had a trio of 30-minute LPs and a 75-minute concert. And Michael Anthony on bass and harmonies. Eddie and Wolfgang at the same mic matching DNA in support of DLR’s conscientious vocal bluster might even have been an improvement.

Full assessment of the show arrives with next week’s Chronicle, but Wolfie’s 24 greatest hits riding his old man's reactor guitar tell the tale best. Who says youth is wasted on a 16-year-old bassist?

You Really Got Me
I’m the One
Runnin’ With the Devil
Romeo’s Delight
Somebody Get Me a Doctor
Beautiful Girls
Dance the Night Away
Atomic Punk
Everybody Wants Some
So This is Love?
Mean Street
(Oh) Pretty Woman
Unchained
I’ll Wait
And the Cradle Will Rock…
Hot for Teacher
Little Dreamer
Little Guitars
Jamie’s Cryin’
Ice Cream Man
Panama
Spanish Fly/Cathedral/Eruption
Ain’t Talkin’ Bout Love
Jump 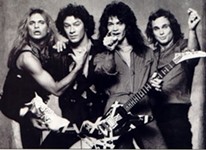