To define Stevie Wonder solely in musical terms undervalues his full contribution to humanity. The pure, unfettered joy and message of love the 57-year-old musician has spread worldwide since his youth at Motown Records – for whom he still records – takes on Martin Luther King-like proportions in their unification of a species. Stevie Wonder’s universe, musical and otherwise, functions on the metaphysical laws of mankind as one mind, body, and spirit. The full house last night at the Toyota Center in Houston stood, clapped, screamed, and sang as a single entity.

“Hello!” exclaimed Wonder in his timeless pitch of exuberance. Guided onstage by his voluptuous daughter Aisha Morris (“I know what you’re thinking,” he laughed, warning that he had a shotgun. “And I never miss.”), the former Steveland Hardaway Judkins retold the story of a dream he had upon his mother’s death last May. “She said, ‘Boy, you better get your ass out there [on tour].’” One has the late Lula Mae Hardaway to pay blessed thanks for her son’s first extended road trip in a decade.

Before opening the two hour and 45-minute concert with “Love’s in Need of Love Today,” Wonder preached exactly that then sat at the black grand piano among a city of instruments piled high around him. Soon, his 11-piece band joined in as he switched to his electric keyboards for a triptych of tunes from 1973’s Innervisions, “Too High,” the dazzling “Visions,” and “Living for the City,” which pulsed through the arena in a tsunami of communal ecstasy. All present joined Lula Mae Hardaway in her new high-rise.

“Master Blaster” rippled and rolled next, and maybe it was universal shock at the reality of what was unfolding live and in person that prompted Wonder to ask at the song’s conclusion, “Feeling all right? Feeling all right with us? With each other?” The talk box he employed for a brief lesson on Texas blues, including a snippet of “Further on Up the Road” and mention of Stevie Ray Vaughan, preceded loose funk that morphed into “Higher Ground.” By that point, everyone had come to rest on said plain.

With “Ribbon in the Sky,” Wonder returned to the piano for an unhurried and luxurious 20-minute singalong, time slowing, slowing, and finally pausing to lose itself in free form soul. “You and I” followed as similarly untethered aural reverie before “If You Really Love Me” stirred the mass, Wonder rocking back on stool, tilting his head skyward, and grinning for the stars. His delight rang untold wattage, more so when he and his daughter traded vocal duties on “How Will I Know” from 2005’s A Time 2 Love, Wonder’s most recent album. “Don’t You Worry About a Thing” gave way to “Signed Sealed Delivered I’m Yours,” which was rejoined by its hillbilly cousin. “I feel there’s still life in that song,” he insisted jovially. “I see it being done country.” As with most his addresses to the assemblage, Wonder’s impish sense of humor permeated everything he said. His five-minute introduction to “My Cherie Amour,” recalling his chaperoned early days on tour as a Motown act, brought down the house. His could have been a spoken word tour and elicited the same fulfillment.

Impossible to describe, perhaps, is the ageless quality of Wonder’s voice, an instrument of such unconventional lyrical interpretation and delivery that even the most faithful readings of his monumental catalogue imbue vintage material with bristling new life. A Wonder composition rendered live by its creator breathes wholly reborn. These songs are past lifetimes flooding the present on their way to immortality. “For Once In My Life,” “I Was Made to Love Her,” “Sir Duke,” “You Are the Sunshine of My Life,” “Superstition,” “I Just Called to Say I Love You,” one after another after another in a hail of hits that left one breathless, concluded with the caress of closer “As,” which, like the opener, blossomed originally on 1976’s Songs in the Key of Life.

That life, and the death of UGK’s Pimp-C, which the singer lamented, was marked by a ceremonial closing proclamation of December 4, 2007, as Stevie Wonder Day in Texas. Those of us present – and those who make it to Grand Prairie’s Nokia Theatre this evening or tomorrow night – now carry that day within us always. 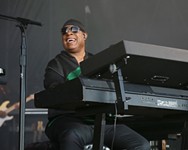