Pissed Jeans: That Warm Feeling Below

The awesomely named Pissed Jeans headlines the Saturday slot of Beerland's massive, inaugural garage rock fest, Ground Zero Texas, and by that point in the weekend everyone should be sufficiently blotto.

Good thing, that. The Philly quartet's Sub Pop debut, Hope for Men, is abrasive and bottom-heavy, but singer Matt Korvette, who definitely barks like a Yow, doesn't mind getting introspective, questioning what it is to be a white, middle class adult male with a day job in a rock band without whining about it. Korvette pokes fun at himself just like he does the Whole Foods-shopping, Ford Explorer-driving passerby ("The Jogger") or a boot-licking acquaintance ("Caught Licking Leather"). The first song out of the gate on Hope, "People Person," warns us he's not one; on "Fantasy World," he barks that he's a "special guy in my fantasy world." It's awkward, animalistic, and I recently asked Korvette about adjusting to being a grown-ass man.

Austin Chronicle: Hope for Men is one of my favorite albums this year; I like the way it wrangles the banality of everyday life and soul-sucking day jobs, which seems to be a big theme in the album. Am I off base here?
Matt Korvette: No, I'd say that's a pretty big theme in both the album and my life, really. I spend 40 hours a week at my job, and probably like 1 or 2 hours just thinking about my job when I'm not working. I'm definitely coming to terms with being an adult, one way or another.

AC: What's your day job?
MK: I work as a claims adjuster for an insurance company.

AC: How long did the lyrics to "Fantasy World" take?
MK: Not very long at all. It's actually loosely based on a song I used to sing with my friends. We’d all hang at my friend Joe's house and wrestle each other in his basement, eat pizza, and break stuff in the backyard. We were aware that we were all pretty much living in a fantasy world, but it was so much fun and really some of the best times of my life.

AC: How does sex, frustration, low self-esteem, and food sculpt your lyrics?
MK: Man, get out of my head! Those are all pretty important topics when it comes to writing lyrics. I think everyone has some pretty deep issues, but it varies widely. One guy might be an alcoholic; one guy might hate his mom; one guy might excessively wash his feet. I just try to go with how I feel, specifically, and get it out there. It's kind of a nice feeling to do that. I think it might even keep me a bit more balanced in my regular life, to have that release available.

AC: The name Pissed Jeans, the title of the album – are you poking fun at the male species, or do you really have hope for men?
MK: I think about guys a lot, and what we have going for us. We're a masculine band, not exclusively so, but I just try to write about what I know. In no way do I feel that men are superior or anything like that, and honestly so many men make me want to cry. But we're trying to find hope, trying to be honest and be good people, and I think that will just remain the goal I'm aiming for. Just to be a good person. It's also kind of a silly title, and came from a strange coincidence, which makes it somewhat fitting because really, we're dealing with some serious shit. But by no means are we a band that is unable to find humor in ourselves and our surroundings.

AC: It’s obvious, but when you say you're a masculine band, how so?
MK: In the most obvious sense, we're just four guys. None of us know what it's like to be anything other than four white guys, raised fairly comfortably in middle class towns. I'm not going to talk about police riots or any sort of thing I've never personally experienced. I think a lot of people ignore who they are, in favor of more standard song topics, especially in the punk scene, so we're trying to keep away from filling any standard or generic holes and instead just be like, "Hey, this is us," after doing some heavy introspection. 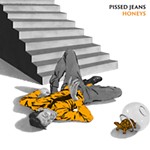