Some of you are going to snicker, but I’ve grown fond of Avenged Sevenfold for much the same reason that I’ve been listening to a lot of 101X lately: Teenagers have invaded my house. That means Linkin Park’s “Bleedin’ Out” and Rihanna’s “Shut Up and Drive” rank way up on my current Top 10 (which actually is more of a Top 6), and I can identify two members of Fallout Boy. None of these causes as much uproar around my house as the recent release of Avenged Sevenfold’s new self-titled CD.

Johnny Christ is 23 years old and on tour with Avenged Sevenfold, one of the hottest alt-metal bands around, but the bassist is quick to point out he did not drink the blood of a king cobra during their recent jaunt to Jakarta, Indonesia. Aside from that, life with the Huntington Beach, Calif.-based quintet suits him just fine, especially coming off the band's smokin’ summer, which included headlining both the Warped Tour and Ozzfest followed by their fourth release that went No. 1 immediately on MTV’s Total Request Live. Currently on tour to promote the album, Johnny Christ called from the road to chew the phat before their La Zona Rosa gig this Saturday, Dec. 1.

Austin Chronicle: So you didn’t drink the blood of a king cobra. How was your experience touring Indonesia otherwise?
Johnny Christ: That’s right, I did not. That was just Synyster, Zachy, and the Rev. It was interesting but nothing extreme, just wonderful place to go and be. It’s really kinda Third World. You turn around and you literally got 5- and 6-year-old girls begging for money. Then you go play a show in front of 4,000 people, and you’re like, “Wow, this is kind of a trip!” You see all these kids for an hour and 15 minutes, and they're really, really stoked to see a band come there. It was really cool.

AC: Don’t you think that speaks volumes about the universality of music? I mean, what are the odds that they knew what you were singing about?
JC: I’m not sure they really understood the words. They weren’t singing along to songs, like every kid the second night. We played in Singapore, and because of the Internet, kids were already singing the words to “Almost Easy.” And that was before our album was out! It was kinda crazy.

AC: What’s the view from 23 of old rock bands like U2 and the Stones?
JC: I definitely respect the Rolling Stones and U2. U2 really had some amazing songs that I really love. But my heroes are bands like Metallica, Megadeth, and Pantera that aren’t really around anymore. And Guns ‘n Roses. They’re all like my favorite bands of all time.

AC: Your new bio says y’all went back into [A7X lead singer] M. Shadows’ parents’ garage for the new CD.
JC: Yeah, it’s really symbolic. We wanted to get back to where we always rehearsed, like Waking the Fallen and Sounding the Seventh Trumpet. That’s where we did a lot of stuff, and we always like to go back there. It just feels right, you know? A one-car garage. We had Pro Tools set up, we got a drum set, we got everything set up, and that’s where we always made music for the band. We had a great experience writing this record. It was a lot of hard work, but it was a lot of fun. We write out of our homes, you know, just like the Rolling Stones

AC: Some of the band’s songs seem to have a more political edge lately.
JC: You know, they’re not really political songs. I can easily understand them being taken that way, but we’re not a political band at all. Yeah, we got our songs like “M.I.A.,” which was very much about what's going on. It’s not picking one side or the other. It’s not political; it’s just the idea.

In “Critical Acclaim,” it’s really more about a human thing. Like everyone’s looking down everybody else, and everyone has their own opinion, and no one’s coming together in this country. The middle of the country is being called stupid and shit like that. Well, the coasts are just way too cool. It’s just kinda like a high school thing, you know. There’s no reason for that to go on. You just want everyone to understand that everyone has an opinion and go from there. Don’t call someone stupid because they have their opinions, figure it out. And that’s really what that song is about. It’s just insane to see that people on the coasts are looking down on middle America. There are wonderful people there.

AC: Hey, try having a Texas accent in the North. It means points automatically get deducted from your IQ. Speaking of which, the band started dabbling in country music lately, what’s up with that? Are you gonna duet with Willie Nelson?
JC: Ha ha ha, anytime he wanted to, man! We are willing, no, more than willing to work with anybody. We love what we do. We love music. We love playing music. We love playing all kinds of music, and to work with somebody of Willie Nelson’s stature would be awesome. We did a collaboration with Good Charlotte, so you know we’re very open with it.

The country influence … you know, it’s really kinda funny. We just started out listening to country records, and the production value was so good. You can hear every instrument, real big and heavy and warm sounding. We kinda wanted to take that and incorporate that into our record. We wanted to make the biggest sounding record we could.

AC: My nephew Tyler is your biggest fan in Texas and he’s been coaching me on your band. Do you mind if he asks you a couple of questions before we wrap this?
JC: Sure.

Tyler Moser: Hey. What’s new for 2008 after you headlined at Warped and Ozzfest and made No. 1 on TLR in 2007?
JC: We’re gonna get out there and keep touring for the new record. There are a lot of fans out there we love to play for, and we've got a lot of new songs that we have a lot of fun playing. There are a few other things in the works now, but we’re definitely gonna keep coming around. We’ll be seeing you guys in what, a week from now in Texas?

TM: Yeah! I read where you talked about getting picked on in the band. Do you still get picked on?
JC: Ha ha ha! You know, it’s a funny thing because the band had already been pretty established by the time I joined them. The first tour that I went on was the first tour that these guys actually made money on. And yeah, there was definitely a bit of hazing there. I’m not so much “picked on,” as I was just the new guy. I’m still the youngest and “the little brother” of the band. After being on the road for so long, it just kinda becomes a family thing. 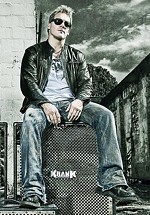 Chris Jericho: From Y2J to 'Sin and Bones'
WWE superstar on touring and the next big things in wrestling and metal Attack of the Teenagers