There’s nothing quite like the Ramones to get you through the holidays. Friday at Emo’s, longtime drummer Marky Ramone, backed by the Queers, rekindles the band’s best. Here’s the remainder of the interview from this week’s "Off the Record."

Off the Record: You came into the Ramones at the peak of their early career. What sticks out to you the most from the period?
Marky Ramone: First of all, Tommy couldn’t tour anymore. Not that he couldn’t, he just wanted to produce, so he was in the band for three-and-a-half years, and then they asked me to join the group. I joined in the spring of ’78, and the first song I recorded was “I Wanna Be Sedated.” One of the reasons I joined the band was because I knew that Tommy had production experience and that he was going to produce the album I was going to be on. The other Ramones used to see me in Richard Hell & the Voidoids and a band I was in called Dust. They used to be in the audience and they liked my playing. Dee Dee asked me first and then Johnny. They gave me a cassette of the songs that were going to be on the first album and the live show, which had about 25-26 songs. I had to learn all of that in about two weeks.

OTR: How familiar were you with the group before then?
MR: We all knew each other from CBGBs and Max’s Kansas City, which was another club that we all used to hang out in.

OTR: Did you have the sense going into it that this group was really onto something?
MR: No. At the time we didn’t know what we were influencing. Obviously, we had some idea. The English picked up on it a year later, and then L.A. picked up a year after that. Basically we would go to places and we would see bands trying to sound like us opening up for us, 1-2-3-4 with the leather jackets and the jeans and the Converse sneakers, which you see everywhere now. We were very grateful and happy that we were at least laying some sort of groundwork for bands that just wanted to play music.

OTR: The early Eighties brought a lot of change in the mainstream with the rise of MTV and New Wave. Looking back, how did that play into what was happening with the Ramones?
MR: When we did Rock ‘N’ Roll High School, that put us almost into the mainstream. I don’t want to call it mainstream. We were getting more fans, along with the Phil Spector album, End of the Century. What ended up happening was that the radio didn’t want to play punk rock. Then new wave came in, which was a more subtle version of punk rock, and the radio preferred to play that instead of the Ramones, the Sex Pistols, or the Clash. The Clash had a few hits, but that was later on. We sort of persevered and we never changed. We always stuck to our guns and we didn’t wander off to other genres.

OTR: The band did branch out quite a bit though. You just mentioned recording with Phil Spector. What was that experience like?
MR: Me and Joey got along with him just fine. Johnny and Dee Dee didn’t. I used to hang out with Phil everyday while we were recording. So did Joey. Some people get along, others don’t. It’s chemistry. The musical elements of the Ramones are still in those songs, but so is Phil’s influence. It was the combining of two genres of music. Some songs worked very well on that album. Some didn’t. But now I feel the songs hold up a lot better than when they came out, like “Rock ‘N’ Roll High School” and “Rock ‘N’ Roll Radio.” It was an experiment I thought was interesting. I recently just defended him twice on Court TV. I feel that he’s innocent. I don’t think he’s guilty at all.

OTR: What exactly were you able to contribute to the case? Have you two kept in touch over the years?
MR: The thing is, he, that night, met the girl and they went home. They were both under the influence of drugs and alcohol, and when you mix those two things accidents happen. I feel there was no motive for him to kill her. There wasn’t enough evidence to put him away this time and I don’t think there ever will be. Phil is not a murderer.

OTR: Do you think the reason Joey got along with him better was because he had more pop leanings than the rest of the group?
MR: Dee Dee and Johnny liked Phil’s music a lot; they just didn’t like his personality. I’m from Brooklyn. Joey and the other guys are from Queens and Phil was from the Bronx so we all knew the attitude and the bravado and the posturing. A lot of the time, Phil was just acting like a street corner tough guy, but we saw all of that. Eventually, Joey and I took it in, but Dee Dee and Johnny were turned off by that.

OTR: You left the group for some time. What was your motivation for rejoining?
MR: What happened was I was allergic to alcohol, and I mean that. I was drinking, not even drinking too much. I would be having a few drinks with Joey or Dee Dee and I would get sick of it. I was getting to a point where it was becoming a really bad habit. I had to get out and clean up my act. In mid-'87, the drummer that replaced me for a while left the band and there were 17 shows they had to do. They called me back up and it worked out fine and I didn’t have to bring along the alcohol. I realized that playing was more important than drinking. I did have a good time when I was hanging out with the guys and drinking but it was more important for me to call it quits.

OTR: I’m sure your whole career you’ve dealt with people not considering you a real Ramone. How has that changed since Johnny passed in 2004?
MR: It’s unfortunate that the three passed away and that Tommy is into bluegrass music. I don’t want to say it, but Tommy left the band only three-and-a-half years into its existence and I picked up the ball and scored the touchdown for 15 years. More people saw me in the group. They saw me in Rock ‘N’ Roll High School. I’m on 11 albums. Tommy is only on three. He’s into bluegrass music now, which is a pretty bold move. He hasn’t been in the Ramones since 1977. It depends on how you look at it. He could be called the Pete Best of the band and I’m the Ringo. He could be called the Brian Jones of the Rolling Stones and I’m the Ron Wood. What is more important? I don’t really believe in the word important. Who was the bigger contributor? I think that Tommy’s stuff was very good. What I did was keep the machine running for those years.

OTR: What’s the album you always find yourself coming back to?
MR: It’s always the first one, Road to Ruin. I also really like the later ones, Mondo Bizarro and Rocket to Russia.

OTR: What do you think most people overlook about the Ramones’ career?
MR: It’s funny because the End of the Century album was the biggest selling one. It sold three times more than the first one. The middle albums like Animal Boy and Halfway to Sanity – those were the overlooked albums, 'cause there’s some good things on there.

OTR: Now you’re touring with the Queers playing Ramones songs.
MR: They’re my backup band for this and they’re really good. They’ve been around for years and were very influenced by the Ramones. I felt that with all these bands that are reforming like the Pistols and the Police and charging $200-250 a ticket – I’m only charging $15 or 20. It’s time to rekindle these songs, who else is there to do it? To do 30 Ramones songs is a pretty cool thing for that price. Obviously I’m not going to make a penny on this once you take into account the expense of traveling, the equipment, and paying the band members. I’m really doing it just to keep the songs and the legacy alive because they’re just too good not to be played and I enjoyed it. I think the other guys would like the fact that I was doing this. 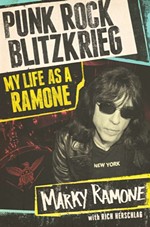