At the Cactus With McCue

The world is seemingly filled with sensitive singer-songwriters agonizing over lost love and metaphorical rivers that are wide and deep. Anne McCue isn’t one of them. OK, she occasionally writes of romance and the mundane parts of life, but the Nashville resident’s ace up the sleeve is her guitar playing. Where most folkies are content to strum an acoustic guitar and leave the heavy lifting to a sideman, the Australian McCue can stand toe-to-toe with nearly any guitar slinger you might name.

Her appearance at the Cactus Cafe last night was a loose-limbed affair. She was breaking in her new rhythm section, locals George Reiff on bass and Rick Richards on drums, but if the slim blonde hadn’t mentioned it was their first show together, you might not have known. Highlighting songs from her latest, Koala Motel, she used every guitar in the battery she brought on stage, from the National steel to the Danelectro 12-string to the lap steel, and each allowed her the freedom to explore a different type of roots music, including swampy Creedence stomp, ethereal blues, and countrified jangle.

Even when McCue extended a couple of songs, it felt more like an appropriate way to display her feelings rather than egocentric wanking. Her stage personality also kept things relaxed. Rarely does an artist appear so comfortable onstage as to debut new songs with a new band and pull it all together with a confident wink and always-smart mouth. “I grew up on the west side of Sydney,” she claimed. “The side without the money, the side that looks good in the rearview mirror.”

These days, there are very few women working the same territory as McCue who can combine tough and vulnerable. That she does it with poise and a self-deprecating sense of humor makes her an artist worth seeing again. Luckily, she’ll return for a house concert this Sunday afternoon. Contact Polly Parsons at pollyparsons@earthlink.net for more information. 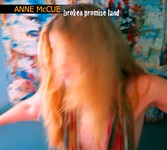