November gets such a bad rap, represented by all those turkeys and pumpkins and pilgrims with muskets. The weather might dump freezing rain here but more likely we’ll see balmy days like the ones of late. That’s good news for the Texas Book Festival, which may soon need to change its name to the Texas Book and Music Festival if the entertainment gets any more ambitious.

Saturday's lineup in the music tent, next to the State Capitol, kicks off in the morning with Djembabes, Gypzee Heart, and Joel Guzman & Sarah Fox, but I love the afternoon bill: Ernie Mae Miller (1pm), Steven Fromholz (2pm), and Jesse Sublett (3pm). Miller’s appearances grow fewer and Fromholz is always a delight but Sublett’s recent solo gigs are a far cry from his days in the Skunks. Bear in mind that “solo” show means him playing acoustic guitar and upright bass plus an appearance by his son Dashiell and Jeff Jacoby. Sublett, who specializes in playing “noir blues and murder ballads” when he’s not script- or book-writing, will be introduced by special guest emcee Michael Connelly, author of Lincoln Lawyer and Black Echo.

It’s been a pleasure to watch the Celtic Festival grow from intimate gatherings that weathered rainstorms with Gael force to a regional success that makes it as much a must-see event as the Texas Renaissance Festival or the North Texas Irish Festival. And lest you forget just how solid the local Celtic players are, here’s a chance to see bands like the Tea Merchants, Silver Thistle, Ed Miller, Needfire, Doc Grauzer, and the Tradmarks, right in your own backyard. Slainte! 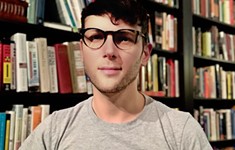