What the World Needs Now

Austin, 2007, is a much different place than when David Lowery started playing here in the mid-Eighties with Camper Van Beethoven and later, Cracker. That’s OK, because David Lowery has changed a lot too: Cracker’s recent CD Greenland reaped much critical praise but on this day his job as a parent is to decide whether or not his son is really sick or if this is just a Monday morning don’t-wanna-go-to-school tummyache.

Luckily for the boy, Lowery decides that yes, there’s cause for concern, so after making arrangements with the child’s mother, he turns the conversation to one of his current projects: making videos from songs like “Deep Oblivion” and “Baby, All Those Girls Meant Nothing to Me” and posting them on YouTube. This won’t surprise longtime fans of Lowery, whose dry, wry Nineties-era cult hits “Low” and “Teen Angst” sold out Liberty Lunch on a regular basis.

Though Lowery was born in San Antonio, his music takes its cues as much from folk-rock as alt-rock, reflecting the panoply of sounds from the various places he lived during his military childhood.

"I’m just following what to do with technology,” he explains of the YouTube projects. “I’m constantly on YouTube and so are my friends. And there are so many Cracker and Camper things up on YouTube.”

“I figure it’s a good enough venue for what would normally be a small project for a label, a solo record by me, and I wonder if I can circumvent a lot of that by putting the songs directly up on YouTube. The traditional route is you get an advance from the record label and go through the process. Once I get enough songs for a solo record, then perhaps, I can put it out. I’m not sure you have to do things in the same order you used to now in the music business but there’s no way to find out without doing it.

“There will be a traditional CD," Lowery continues. "It’s not so much about eliminating the CD or DVD, but that there are all these other ways people listen to music. People ask, ‘What do you think of the way things are?’ and I just say, ‘The music business is really different than it was.' But it’s not that different from when I started with CVB in 1983. At that time, the major labels were just putting out hair metal, R&B, or country music. Specialty labels were around too but Camper didn’t fit into any of those models. So we went around to colleges, trading shows on campuses much like bands do on MySpace these days. We made new technology with the dubbing deck; people were dubbing cassettes and making mix tapes. As a corollary to that, bands were recording their own stuff, going to Kinko’s with the artwork and making their own tapes to sell at shows. In that way, it’s not so different from 1983. Yes, 1983 – my son is marveling at that. It’s a long time ago, isn’t it?”

“Yeah,” agrees the distant young voice in the background, clearly awed by the perception of time.

Cracker plays with Jason Isbell & the 400 Unit tomorrow at Mohawk.

SXSW Panel: Love the Art, Fuck the Artist
A bull market for artist compensation? Dream on. 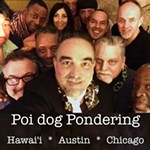