… and gone to Heaven. This monkey’s gone to heaven.

Musically, the Nineties are fenced in by locale: Nirvana. Pearl Jam lives, transcended, but sometimes we remember Soundgarden, maybe Mudhoney. Mia Zapata’s Gits. Seattlites all. My favorite was L7.

Moments when your eyes roll back white with ecstasy hit nightly in rock & roll. The credits-roll of recall curls the corners of your mouth in eternal grin. L7 on my 30th birthday at Emo’s in 1995 is topped only by U2 in Barcelona a decade to the day later, but even the girlies' last gasp at Stubb’s, SXSW 1999, caused hot flashes. We climbed aboard Slap Happy’s "On My Rockin’ Machine" and peeled estrogen-fired wheelies in a Panzer. Bricks Are Heavy (1992), but guitars built the Trojan Horse.

Eins beide drei used to count-off Broomhilda the Wicked, a gauntlet thrown down by Dee Dee Ramone originally. Spit by Sparks all those years in L7 (nee 1985 in L.A.) – lit fuse to her perfect storms of monsoon riffs and slashing wit – that barked command loosened the dogs of war. What the Runaways touched off and Sleater-Kinney perfected, L7 made flesh and bone only to then splinter and splatter both. "Wargasm."

When Sparks ground out the line "My diet pill is wearing off" as Jennifer Finch, Suzi Gardner, and Dee Plakas scowled behind her sonically, "Diet Pill" choked back feminism while balling and raising a fist for it. Sparks’ "Shitlist" turned populist backhand into a curse, and live, Finch’s "Everglade" plowed pure blisskrieg, only the Jesus Lizard’s "Nub" and Duane Dennison’s screaming slide therein any match for it in clubland’s gladiator arena.

Plakas still keeps an implacably concrete beat behind Sparks, now backed by the Stellar Moments, two guitarists and a bass player – one of the former and the latter doubling as boy-toy eye candy/beef cake. Sparks' upcoming solo debut, Transmiticate, samples five cuts on a merch table EP, but only hip grinder "He’s Got the Honey" and "Infancy of a Disaster," demonstrating the frontwoman’s forever-forked veteran tongue, muscled their way into the set. As for the boss lady's center stage dynamics, given that the mascara-raccoon rock vampire once had a "Deathwish," she made rare recent Dallas/Austin wonderamas from Annie Lennox and the Avengers’ Penelope Houston sound mewling by comparison.

Actually, Sparks’ bounce, banter, and cheerleading high kicks didn’t aspire to the Brick-like density of her former band. Instead, clear-eyed and fit, in her plaid pants and bow-tie ribbon, the guitarist let loose a Joan Jett-like upbeat off which meaty hooks dropped faster than ripe mangoes off a tree. Each new song built off the momentum of the last until all in attendance sighed gratefully at the finale. Donnas fans, who report that the Bay Area brats didn’t hold a candle to Sparks, got an unforgettable history lesson, while the faithful received the ultimate affirmation that any nostalgic fealty to Sparks and L7 deserves its sacred spot in their pleasure centers. Smell the magic. Again. 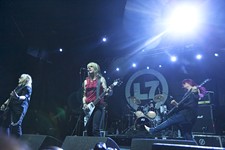 L7 FFFF Review
Hammy, hardcore, and as natural as their Nineties heyday