Policemen ticketing a guy for bathing in the fountain across from The Dallas Morning News at least signals life. On game day Sunday, “The Big D” stands for desolate. Amtrak empties into the heart of downtown, one way only, six-and-a-half hours, and $30 outta Austin, 4pm.

“Tomorrow” repeats at the climax of the Scottish Oscar winner’s 90-minute minor miracle, dominoing into two other Eurythmics stigmata, “Thorn In My Side” and set closer “Sweet Dreams (Are Made of This).” During “Tomorrow,” all 1,600 of the faithfully assembled – standing, cheering, on all three floors of this infinitely nicer Hogg Auditorium – camouflage an autograph seeker in the sixth row, who motions to George Michael’s companion with a Sharpie and “Sing” card. The singer, who hasn’t taken his eyes off the stage the whole performance, nods at the prod and obliges.

That third of four Divas, the third number of the night, leaves Lennox at the lip of the stage with a look to melt broken glass, her tiger green eyes gleaming with confidence in a voice to take us all “Into the West,” a selection sadly omitted from the 17-song set. When she pulls up a stool afterwards for “Pavement Cracks,” boom and control pair up with whisper to a roar, Lennox exuding the emotional density of great American soul sisters. New heartbreakers “Dark Road” and “Smithereens” prep the headliner's solitary turn at the piano for “Here Comes the Rain Again,” Bare’s hopeful “A Thousand Beautiful Things,” and “Sisters Are Doin’ It for Themselves,” Aretha Franklin free and none the poorer for it.

“Cold,” meanwhile, envelopes Lennox completely, every line combed by expressive hands for momentary clairvoyance. “There Must Be An Angel (Playing With My Heart)” achieves it with the tune’s MTV entry flashing royal nostalgia from two decades back. Song of Ultimate Mass Destruction, the driving “Ghosts in My Machine,” feeds into “When Tomorrow Comes.” Naturally, opening declaration “No More ‘I Love You’s’” has proved boastful, baldly false on this now pouring, lightning-streaked Sabbath. There’s no such beast as unrequited worship in the church of Annie Lennox.

Girlie Action
A Christmas Cornucopia, You Are Not Alone, The Wind That Shakes the Barley (Record Review) 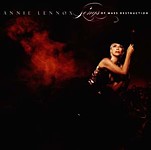