Starving and Art in Marfa, Texas

Even in October, the late afternoon sun in West Texas shows no mercy. We zoom past a group of buzzards sitting on posts, casually staring at a fresh, flattened carcass. The endless rows of telephone poles all bend slightly to West, as if pointing at the looming clay-colored mountains dotted with Yucca. The whole desert seems to be saying, "Eh."

The sleepy, very David Lynchian town of Alpine (there’s even a Twin Peaks Liquors there) sets the mood for the drive into Marfa, a town that sneaks up on us, until we see the hordes of kids with tattooed arms and black shirts ambling down main street. Then the desert sky opens and it starts pouring.

Thousands descended upon the small town of Marfa, Texas this weekend, doubling its population for the yearly arts open house sponsored by the Chinati and Judd Foundations. But most of them – including a whole lot of Austin faces – were really there to see the free musical guest, Sonic Youth, perform Saturday night. This convergence of “underground art” types on the town, which supports a burgeoning art scene, but also has a Dairy Queen and cops who wear cowboy boots and ten-gallon hats, presented a great social experiment. Young people wandered the streets carrying 12-packs, because there was only one small bar open. Down in front of the Hotel Paisano, the historic filming headquarters for the 1955 James Dean movie Giant, free food was being doled out as the sun set, the soundtrack provided by a rousing mariachi band.

Perhaps because of the weekend's influx, many of the restaurants and businesses were closed, and a man nearby wondered aloud if the closed pizza place was really a restaurant or if it was some cool gallery no one new about that just looks like a restaurant. This happened a lot, and that state of is-it-art? confusion ran throughout the night, culminating as we gathered in an old airport hangar across the street from the recently-renovated Thunderbird Hotel to see Sonic Youth. By 9pm, people seemed to be flowing out of the hills at an alarming rate.

Thurston Moore hopped onstage to introduce the hand-picked opening act, Black Leather Jesus. “They’re from Houston,” the lanky guitarist said. “They’re pretty subterranean, man.” With that, the quintet wordlessly took the stage and created vaguely disturbing low-end electro-noise for about 30 minutes. By the time Sonic Youth walked onstage at 9:45, the hangar’s still-swelling crowd was exuberant, drunk on Miller High Life, and, as one nearby fan exclaimed, “ready to see some hella tight art.” Oh, right, this weekend was about art.

Couldn't have picked a better band, though. SY, beefed up by the addition of Pavement's Mark Ibold on bass and a trippy-ass light show, played mostly from 2006's Rather Ripped and their classic '88 album Daydream Nation, as they had the night before at their excellent Stubb’s show, but they seemed a little more relaxed in Marfa. The Daydream stuff sounded great, especially "Hey Joni," "Teen Age Riot,""and "The Sprawl," and it’s nice to see they’re playing the songs outside their Don’t Look Back series of shows. I asked the kid next to me, a local, if this was the first time he'd seen Sonic Youth.

"This is my first concert," he replied, his shellacked mohawk nearly poking me in the eye. It was surreal to say the least, seeing Sonic Youth in the middle of the desert, but even more surreal that locals happened to wander by, perhaps on their way to the Pueblo Market.

THREE encores later, SY left us sweaty and spent. After an hour of sleep in the hotel (aka the car) and a quick brushing of teeth in the convenience store restroom, we ended up at the lovely Brown Recluse for breakfast Sunday morning, because it was actually open. I asked the pleasant South African gent who runs the place what the deal is with Marfa, and it summed up the whole weekend.

“We aim to confuse.” 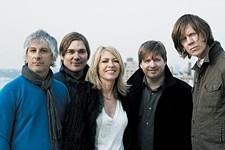 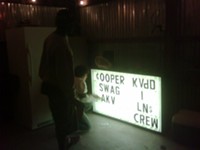 In Which We Smoked Marfa Lights
A trip, guns blazing, out West