Death comes much too quickly and silently after a certain age. Last week saw two very unexpected deaths from opposite ends of the local musical spectrum and they’ve provoked myriad thoughts.

The email from singer Libbi Bosworth was short but sad: Did I know Gary Primich had been found dead? No.

Primich was an outstanding harp player, one of the most loved and respected ones. His name was evoked this past weekend in places like Patsy’s Cowgirl Café and the Continental Club. Over on his website, his family and former wife and friend Tina posted notice along with a link to three suggested recipients for memorial donations in lieu of flowers. The Oak Hill House, SIMS Foundation, and Animal Trustees of Austin are the chosen organizations, and fine ones they are.

I talked to Bosworth on the phone for a while that day but she was terribly shell-shocked by the news, having recorded with him before. “When he played, it was like a wild love affair,” she enthused. “I just loved him as a person.”

Several videos of Primich are on YouTube, but I liked this interview with him. No announcement yet on a memorial show.

Over on the Raul's/Club Foot Yahoo group for Austin’s original punk rock denizens, the news of Mikey Donaldson’s death at age 46 meant another somber gathering. Donaldson was the bassist for a number of Austin, California, and Amsterdam-based punk and hardcore bands, including the Offenders here, Sister Double Happiness and MDC on the West Coast, and Nitwitz in Amsterdam.

Pat Doyle of the Shootin’ Pains summed up Mikey’s influence: "I learned more about raw animal power playing alongside Mikey for eight years [in the Offenders] than in the 20 years since.”

Donaldson played the Offenders’ 2002 reunion at Emo’s, and you can see them performing "Face Down in the Dirt" here. Even MTV.com got their nose out of reality shows long enough to acknowledge his death and contribution.

Gary Primich and Mikey Donaldson probably never met each other. They didn’t grandstand or go on rock star trips or whine about not getting the credit they deserved. Neither were they marquee names, yet both were players at the very foundation of music, the ones others called on when a wild harp or thundering bass was needed.

Blues Before and After
These gents've got the blues 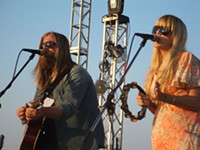