ACL: Blood on the Tracks

"Now I'm bleeding. I'm always bleeding." That's what Annie Clark, aka St. Vincent, said after she ripped the strings off her SG around 4pm Saturday. The Dallas-based multi-instrumentalist stood alone in ripped fishnets and a white dress, the sound from Cold War Kids bleeding all over her too. Still, Clark managed an inspired set as the fest's late add, including a fantastic cover of the Beatles' "Dig a Pony" and a noise-bombed ending to debut Marry Me's "Your Lips Are Red." Her set at the Mohawk tonight promises to sound a little better.

Apparently another fire broke out last night, behind one of the speakers on stage at Bjork. I looked up at one point and saw it, but figured it was just part of her crazy stage show. 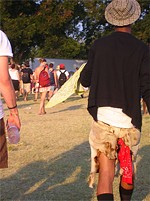