Me and Miss Jones

Shirley Jones looks back at playing against type.

Call her Mrs. Partridge, call her Marian the librarian, call her Lulu Bains. Call her by the names of any of the characters she’s played in more than five decades on the stage and big and small screens and she’s got a story about it. From her Oscar-winning turn in 1960’s Elmer Gantry to pop culture icon in The Partridge Family to hot-blooded grandmother in 2006’s Grandma’s Boy, Shirley Jones is one of the coolest 73-year-olds still working.

She’s also very candid. When asked, “What were you doing before this phone call,” Jones doesn't hesitate to reply: “Having an argument.” That's followed by a laugh. I think she was relieved we didn’t talk much about The Partridge Family. “Don’t you get tired of talking about the series over and over?” I asked her. Another honest answer: “Yes, I do.”

Shirley Jones possesses one of the prettiest faces to have ever appeared on the big (or small) screen. Her natural, girl-next-door beauty was exquisitely designed with a velvety innocence; combined with her bell-clear soprano, no wonder the dream team of Rodgers & Hammerstein scooped her up and put her under contract for Carousel and Oklahoma! Being a squeaky-clean ingénue limited Jones, however, and when she heard about Elmer Gantry being made, she went after the part. Sort of.

“Burt Lancaster fought for me to get that role,” she recalled of how she landed the role of Lulu Bains. “He’d seen me do Playhouse 90 on television and thought I could do the part. Of course, I wanted it! I got to play against type.”

After Jones won the Oscar for Best Supporting Actress for Elmer Gantry, it was right back to musicals, with another memorable role as Marian the librarian in The Music Man, playing opposite the wonderful Robert Preston as the lovable con man. To the studio’s chagrin, Jones confessed she was pregnant with her second son Patrick and thusly swaddled in costumes.

“Robert and I were doing the scene on the footbridge singing 'Till There Was You’ and we kissed. Patrick kicked. Robert said, ‘What was that?’ Years later, Patrick introduced himself to Robert and Robert jumped back, 'We’ve already met!' he told Patrick.”

Jones was one of the first Hollywood actors to cross over successfully to television. “I had been doing movies and doing television was seen as a step down," she says. "You just didn’t do that.” Yet The Partridge Family was a hit for a few years and firmly ensconced Jones as the fun rock & roll mom everyone wanted. That she played mother to her real-life stepson, teen idol David Cassidy, was a quirky twist of fate.

Television didn’t provide Jones with other success, though she’s made a good career out of roles on everything from Melrose Place and Sabrina to Law and Order: SVU and Sesame Street. In 2006’s Grandma’s Boy, she once again played against type as the randy senior citizen Grace. Acting isn’t high on her list these days, however, and she prefers to sing. Which is exactly why she’s coming to Austin.

“I travel with a pianist and a woman who does my lights and sound. I pick out my own material from my movies Oklahoma!, Carousel, The Music Man, so it’ll be a little bit of everything. And love songs,” she quickly adds.

Anything from The Partridge Family repertoire? 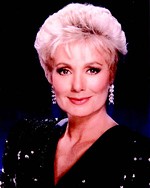 Shirley Jones: Keeping up with the Jones
There's so much more to the stage and screen star than Mama Partridge