Ween sells out at Stubb's.

Dude #1: I was getting somewhere with that chick.

Dude #2: Those boobs have seen some breastfeeding, that's all.

Ah, Ween fans. They're a strange bunch. And Ween, well, I can't say they disappointed those fans last night. The sold-out show at Stubb's smelled like weed before Gene and Dean (Aaron Freeman and Mickey Melchiondo, respectively) even stepped onstage. And I couldn't really see it any other way.

Ween's career trajectory has been a curious one. They went from a lo-fi Shimmy Disc band in the early Nineties to releasing EPs on the more experimental Flying Nun Records, and eventually became most successful on Elektra. For the kind of music they do, it's a bit mind-boggling that they're still so popular, but they get props for still dressing the same way they did in 1991.

Ever irreverent, they started their set with "The HIV Song." Wearing flip-flops and smoking a cigarette, Freeman mirrored the look of most of the fans in the front row, who sung every world to "Spinal Meningitis (Got Me Down)" and the lovey-dovey "Even If You Don't." Two hours later (!), the group wound into an extended guitar jam, bolstered by purple lazers. "When did this band turn into the Grateful Dead?" someone nearby asked. Good question. Discuss.

Still, my favorite Ween moment is the ill-fated Pizza Hut jingle from 2002, which you can hear here. 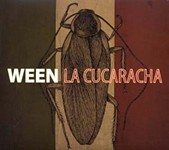