“The Derailers were meant to do a record like this,” explains lead singer Brian Hofeldt. "It just felt like the right time. I have to say the talent of Buck Owens was daunting to stand up to. But we played it respectfully and used the arrangements he used for his records in the first place. There were so many ideas on how to stack the deck, but ultimately I decided on a running order that was fairly chronological and that mostly represented number ones.”

He adds with a chuckle, “It was a recording situation that I’d never been faced with - every song a proven winner!”

Owens is still occasionally dogged by the corny persona he was saddled with on the TV show Hee Haw. The Derailers, of course, take a wider view.

“He was much more adventurous than his image would have led you to believe, and inherently cool," Hofeldt, who knew Owens personally, relates. "I wanted to highlight him as a songwriter. I set the disc up to show his songwriting and how he moved through the years. You can see the movement and genesis of his style. By the time you get to “Who’s Gonna Mow Your Grass,” you realize Buck was every bit a experimenter in the studio as any rock ’n’ roll band.”

Asked for his favorite memory of Owens, who passed away in March 2006, the head Derailer recalls a fond memory from Bakersfield.

“One time that really stands out to me is when he brought me and Tony [Villenueva, the band’s co-founder who left in 2004] up to his office and interviewed us for about an hour and a half with a tape recorder. He just wanted to know how we saw him, essentially, and why we did what we did in honor of him. He was so personable. It was a history lesson right from the horse’s mouth. I think he was planning on writing a book at some point and that was his motivation for doing it. But I also think he truly loved our band.” 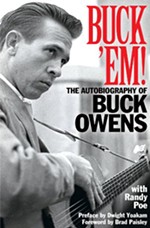 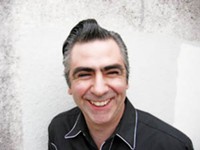 Reborn Again
A new gospel according to Tony Villanueva