Wreck of the Elizabeth Dane

That firelight centers the prologue of John Carpenter’s The Fog. Follow-up to the previous year’s indie tide-turner, Halloween, the filmmaker’s fourth big-screen hit and run blunts its predecessor’s serrated edge with good old-fashion ghost-busting. The blood and guts of All Hallows Eve 1978 recede for The Fog’s milky screen of vengeful dead men returning to celebrate Antonio Bay’s birthday. Jamie Lee Curtis climbs back aboard as well. Cue the piano.

Even before John Houseman’s rumpled sea captain spooks the kids gathered round his bonfire, Carpenter’s score has sounded its first notes over the studio logo that brands the film. One finger, two notes – minor key. Maximum effect.

Another note, a ripple.

"One-hundred years ago, on the 21st of April, out in the waters around Spivey Point, a small clipper ship drew towards land. Suddenly, out of the night, the fog rolled in. For a moment, they could see nothing. Not a foot ahead of them. And then, they saw a light! By God it was a fire, burning on the shore – strong enough to penetrate the swirling mist. They steered a course towards the light, but it was campfire. Like this one!

"The ship crashed against the rocks, the hull sheered in two. The mast snapped like a twig. And the wreckage sank, with all the men aboard. At the bottom of the sea lay the "Elizabeth Dane," with her crew, their lungs filled with saltwater, their eyes open and staring into the darkness.

"And above, as suddenly as it had come, the fog lifted. Receded back across the ocean and never came again.

"But it is told by the fisherman and their fathers and grandfathers that when the fog returns to Antonio Bay, the men, at the bottom of the sea…

(Up bobs the piano.)

"… out in the waters by Spivey Point, will rise up, and search for the campfire that led them to their dark and icy death."

Opening on Houseman’s spoken sea shanty, the soundtrack then flares immediately into the movie’s theme, Phantom of the Paradise synthesizer butchering the mood. The piano figure has already seeped into your wheelhouse, however. In a film where special effects, shock, and gore prod secondary to tone and feel, Carpenter’s score – a constant over most of his infectious filmography – fuses The Fog’s cinematic elements into a long night stranded in Antonio Bay.

Never mind that "Theme from ‘The Fog’" doesn’t bother disguising its musical antecedent, Halloween’s piano drip, which of course trades on the last rites from The Exorcist, which of course scalps New Age guitarist/keyboardist Mike Oldfield’s Tubular Bells. Eighty-eight ivory keys aren’t nearly as scary efficient as a select few in the hands of the right filmmaker. Fright night!

The rest of The Fog CD billows more piano and/or synthesizer with dread. The "Rocks at Drake’s Bay" are particularly dashing, Oldfield out of the chute. Eleven minutes of "Reel 9" flicker Ennio Morricone. 7:45 of bonus track "Blake in the Sanctuary," when the head drowned leper comes for Father Hal Holbrook, lays in thick and heavy, digital fog mixed at iceberg consistency. Don’t answer that pounding at the door. 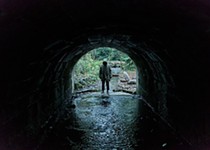 The Haunted Bookshelf
Heavens, this series of reprints of vintage ghost stories may unsettle the composure of the steadiest reader