When the Circus Comes to Town

Bert Jansch's first time in Texas gives us the vapors.

My glasses fog up as I walk from my car, and there are droplets of sweat running down my arms and legs. Humidity is a dog from hell. At least that's what the familiar swamp smell, the meshing of mud and plant, concludes. We had been told by a local this place was “down by the docks,” always a good sign, but as we approach the curious structure, “down by the docks” becomes something else altogether.

The rock-encircled pit in the middle of the venue practically screams Fellini. The crowd sits in seats surrounding Bert Jansch, his first time ever in Texas. As he softly finger-picks his first few songs, a group of people pit right are attacked by a giant flying cockroach. One guy tries to karate chop it, but it's a flying cockroach.

Jansch remains impervious. He plays “Blackwaterside,” an Anne Briggs song from his 1966 album Jack Orion (later “reconfigured” by Led Zeppelin as “Black Mountain Side”), as well as a song called “Carnival,” which is wildly appropriate. There’s a cover of “Blues Run the Game” by Jackson C. Frank, former boyfriend of Fairport Convention vocalist Sandy Denny. Jansch's voice, a mixture of Scottish brogue and high lonesome, is a nice breeze.

After playing a few from last year's The Black Swan, it's easy to see how a whole generation (Johnny Marr, Suede's Bernard Butler) has latched onto Jansch's minimal folk songs. Understated is an understatement.

And it’s hard not to think of one of the signs in the museum: “Many years ago, the land where oranges now grow was covered by the sea. Man came, cleared the land, and planted orange trees. When you eat an orange you can truly say ‘I am getting chemicals left by the sea.’” 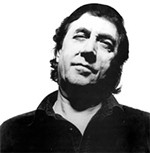