It was perfect, really. There among the sound of motorcycle engines gunning and the smell of diesel and T-shirts with sayings like “If you can read this, the bastard won’t let me drive,” Jennifer Herrema, often imitated, never duplicated, and RTX stumbled onstage Friday night at Emo’s. With white fox tails draped around her neck, a sweatshirt over her ratty blond hair, and a lit cigarette constantly in hand, she looked like the pied piper of gutter metal. That’s perfect, too, because RTX’s latest, Western Xterminator, is straight road hog from the Sunset Strip circa 1989, and they did not disappoint. 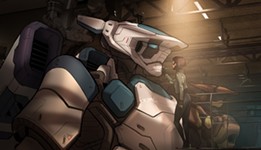