We were 16 years old, hunched over in the balcony of some century-old firetrap in San Francisco. We shouldn’t have been there, honestly, clean-scrubbed kids from the East Bay burbs. But we were. And 25 years later, our two jaws still sit on the floor of that shake, rattle, and roll balcony.

I’d swear on the soul of Joe Strummer that Clash show was just prior to the release of 1982’s Combat Rock. The date on my bootleg tape, June 22, says otherwise. Apparently those memories of Strummer introducing songs from the band’s forthcoming album are just romantic invention, because Combat Rock was released May 14 of that year. This I do know: After that show, having bought the album in Berkeley, I was crushed by the recorded versions of "Should I Stay or Should I Go" and "Rock the Casbah." They were kittens compared to the Armageddon they’d been live. The San Francisco Civic had gone up like Dante’s Inferno that night.

Not six months later, when the Clash opened for the Who at the Oakland Coliseum, the band was dead. "Should I Stay or Should I Go" and "Rock the Casbah" now sounded like Kajagoogoo. It was sad. The Who were just okay, except for "Love Reign O’er Me," which at sunset pounded like Pacific shoreline breakers.

Ready to wash up again on these shores, 2007 is blooming into a banner year for punk rock’s beloved warlord. That’s how Joe Strummer (1952-2002) opens the soundtrack to Julien Temple’s mouthwatering documentary, The Future Is Unwritten, due for release in the UK this Friday. If Sony Legacy’s CD summation of the film is any indication, Temple (The Great Rock & Roll Swindle, The Filth & the Fury) has outdone himself.

Raw, rousing, reinvention, the audio portion of The Future is Unwritten shelves right in with the rest of the Clash catalog. Previously unreleased versions of "White Riot" and "I’m So Bored With the U.S.A." are obvious invites, but the real thrill is hearing Strummer play deejay, spinning Elvis, Eddie Cochran, Tim Hardin, Nina Simone (the Bee Gees' "To Love Somebody"), and the MC5, mofos. They even landed Dylan ("Corrina, Corrina"), not to mention his precursor (Woody Guthrie). Strummer’s first band spunking up golden oldie "Keys to Your Heart" matches the Clash kicking down a pair of their own golden oldies: "Armagideon Time" and a track, which to my knowledge is totally new, "(In the) Pouring Rain," recorded live in Seattle, 1984. No punk rock warlords ever grooved like the Clash.

Whether talking "Trash City" as Latino Rockabilly War or tearing down global a go-gos with his Mescaleros on the great "Johnny Appleseed," Strummer’s new, unfolding legacy on The Future Is Unwritten soundtrack is Rachid Taha’s righteous globalization of "Rock the Casbah." Strummer lived for island gods like Ernest Ranglin and U-Roy, both included here, and the Algerian Taha does to "Casbah" what Mano Negra did for punk rock: takes it international. Moreover, Taha proves that the Clash canon is by now standard and ready for wholesale reinterpretation by any homo sapien with a voice, guitar, or tin can to beat on.

That’s where The Sandinista Project, released today, comes in. A track-by-track cover of the Clash’s Sandinista, this 2-CD griot states almost unequivocally that there’s no such thing as a bad Clash cover. As epic as its forever undercelebrated inspiration, TSP, almost bests its template on some subatomic level in that there’s barely a bad cut on it, which may be more than can be said for the original. Three LPs worth of the Clash’s Sandinista (1981) is a bit overwhelming, but here, where the compositions are the stars rather than what looks a middling talent list, each song comes alive.

Joe Grushecky’s ramshackle opener "Magnificent Seven" may be the first time Strummer’s lyrics have been translated out of spittle, while a campfire reading of "Junco Partner" by Mekons Jon Langford & Sally Timms is the next best thing to Strummer & Mick Jones themselves. More fiddling Americana by Jason Ringenberg & Kristi Rose on the succeeding "Ivan Meets G.I. Joe" meets Amy Rigby taking down "The Leader" by way of Bow Wow Wow’s "I Want Candy."

Jim Duffy’s Village Vanguard rendering of "Look Here," all piano and verve, fleshes out better than the original. One of the Clash’s class of 1977 peers, Stiff Records’ one-off Wreckless Eric, gets suitably bent for "The Crooked Beat" in contrast to the Smithereens smearing pine tar on "Up in Heaven (Not Only Here)." Steve Wynn’s mystic "If Music Could Talk" swirls more Strummer testimonial.

Disc two isn’t quite as compelling simply because the original quickly deteriorates into Jamaican patois. Willie Nile’s straight-ahead reading of Eddy Grant’s "Police on My Back" is flush with rock, while Sunset Heroes’ Gilman Street nerve on "The Equalizer" equals another highlight. The Lothars' robotic "The Call Up," Stew’s gritty "Broadway," and Jim Allen’s banjo skiffle on "Lose This Skin," a seriously whack track originally, dig in and wig out. Camper Van Beethoven, whose cover of Fleetwood Mac’s Tusk remains one of the best tribute albums of all time, twist up "Kingston Advice," and "Silicone on Sapphire," featuring Sandinista Mikey Dread, prompts wicked flashbacks to the original album by sampling it. The Sandinista Project – mission accomplished.

And there’s more Strummer ripe for the plucking. Chris Salewicz’s soon-to-be "definitive biography," Redemption Song: The Ballad of Joe Strummer, courtesy of Faber & Faber, all 600-plus detailed pages of it, is hitting book stores next Wednesday, May 23. That’s the day its review is due to me for editing. Look for it in the Chronicle’s rock & roll summer reading roundup, June 1. 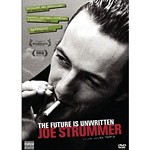 Joe Strummer Was From Mars
The Future Is Unwritten, on DVD