Saying Goodbye to the Ex

I have been extraordinarily fortunate in my life to love and be loved by some remarkably talented men. Last week, I had to say farewell to one of them.

Mike Malone, better known to Austin as Rollo Banks, killed himself in Chicago on April 16 at age 64. A world-class tattoo artist with a rough, inked-up exterior and a soft, liquid heart, Rollo left on this Earth an indelible imprint. Certainly he did on me. From the moment Michael Corcoran introduced us, my life changed in ways sometimes subtle and sometimes fast.

Rollo and I were married Dec. 4, 1984, less than three months after our first date. We stayed married for 15 years and with the exception of a couple of periods of estrangement in the mid-Nineties and around the divorce, we remained very close. For the last few years, I’d been editing his “Tattoo Tales,” a series of stories from his 30-plus years in the business being printed in a popular tattoo magazine. I knew these stories backward and forward, so it was a pleasure to edit them.

Sometime in 1994, I was talking to him about Nirvana. Kurt Cobain had offed himself not long before, and I was trying to explain to Rollo why Nirvana mattered. Rollo wasn’t having any of it. After listening to me go on for a bit, Rollo looked perplexed.

“Maybe we should stop making new records for a while. So we can hear all the music that’s out there that’s not getting listened to because there’s too much of it.”

It was an interesting, unlikely suggestion. I laughed, but the conversation stuck with me.

After his death, I wept for days. I took my dog and ran away to the beach. Then Corky and I decided to have a little farewell to the old man. We invited a couple dozen of the folks associated with the Chronicle who’d known him and gathered at Opal Divine’s Downtown. It was April 25, what would have been Rollo’s 65th birthday.

I brought photos over the years plus a few pieces of art. Corky brought his collection of Honolulu Babylon, a zine he and Rollo produced in the early Eighties. It was wickedly funny, honed on the sword-sharp wit both possessed. On the cover of the third issue was a photo of Rollo holding a gun to his head, Corky’s face right next to him. Macabre was the only word I could think of. That was how he’d killed himself.

Rollo suffered from a variety of illnesses that finally encroached too much on his ability to live comfortably day to day. He always said he never wanted to linger with illness or be confined to a bed or become invalid. He told his tattoo partner, Keith Underwood, that if the diabetes got bad enough, he’d “suck a gun” before undergoing amputation. That phrase is so Rollo, it gave me shivers.

But not the cover of the Honolulu Babylon. “The Terminal Issue” it was called. Most people at the memorial looked horrified at it and then to me with pity. Not me. I just laughed. It was Rollo’s black humor pulling aside the veil of death and reaching out to tweak me through the ether.

From the Vaults: Rollo Banks' Dragon Tattoo
Movie talk about "dragon tattoos" gets me thinking about Rollo Banks 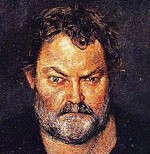 Homeward Bound
Tattoos and ashes and in Hawaii