Looking back at this year's Old Settler's Music Fest.

For the past couple of years, the Old Settler’s Music Festival seemed to wobble on its last legs, both creatively and in terms of attendance. This past weekend, however, it showed great signs of life with respectable crowds; a full, lively campground; and some inspired bookings that proved it’s more than just another (dreaded) bluegrass festival.

The vibe at Camp Ben McCulloch on Thursday night was as pleasant as an Austin music event could be with smiles all around and everyone kicking off their shoes for dancing and hula hoops. Slaid Cleaves cleared the air as to how a singer-songwriter goes about entertaining an audience. Backed by a trio that included striking fiddler Eleanor Whitmore, Cleaves laid down a set of country and folk, fast-paced yet touching and peppered with the occasional yodel. Baton Rouge, La.’s Red Stick Ramblers followed with a plate of swing, blues, and Cajun that had nearly everyone shaking their moneymaker. They’ve had some personnel changes over the years, which has unfortunately led the quintet to lean a little heavy on the swing and away from their Louisiana roots, but there were no complaints from the crowd, which was obviously geared up for a energetic weekend.

I skipped Friday because the lineup just didn’t seem to be worth the trek to Driftwood. I’d seen Sam Bush and Ruthie Foster fairly recently, and I can live without ever seeing John Cowan again. I arrived early enough Saturday afternoon to catch a quick hello backstage with my old friend Jim Lauderdale before the country songwriter took to the big stage for a set of familiar tunes mixed with some from the two discs he released in 2006. While Lauderdale’s goofy jokes gave way to groans, his songs remain sing-along catchy. On the smaller stage, Boston’s raven-haired Sarah Borges, newly signed to Sugar Hill Records, looked like Chrissie Hynde and brought the twang with a hint of punk. Peter Rowan followed with a mix of reggae and Americana that was a perfect match for the easygoing afternoon. With Cindy Cashdollar on Dobro and steel guitar, his invocations of the American West soared.

Sound problems marred the much-anticipated appearance by Iris DeMent. She spent some time getting acquainted with her piano, but she soon settled into a rambling set of old and new tunes. She changed some of the older songs melodically, which made for an interesting listen, but the incessant gloom she conjured became overwhelming. The atmosphere lightened considerably with the appearance of Robbie Fulks and Danny Barnes. As expected, they’re a delightful match. Barnes even rolled out a couple of Bad Livers tunes, while Fulks’ “In Bristol Town One Bright Day” hushed the assembled with its intensity. Joan Osborne rounded out the day with songs that veered from Eighties arena rock to rootsy blues to a tender reading of the Grateful Dead’s “Brokedown Palace.”

There was so much that I missed, but that’s what makes a good festival – infinite possibilities for each attendee to have a unique, affecting experience. It feels great to say that, once again, Old Settler’s has become one of those.

Fourth Annual Bourbon, Bluegrass & Barbecue
Bourbon, bluegrass, or barbecue; which is your favorite?

Summer Pickin'
May is Bluegrass Month! 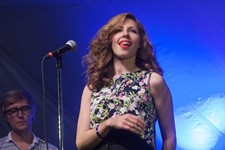