You could see Anthony Kiedis standing some 20 feet below the wide, flat, uncluttered stage, watching, waiting, less for his entrance cue than out of a sincere curiosity in what his three bandmates were gonna come up with last night.

Flea, in a purple Lakers jersey, stage right, prowled 'round his space, mostly looking back at drummer Chad Smith, who was rattling his drums awake. John Frusciante stood at the lip of the stage, tap-dancing gingerly across a sidewalk-long pedal board. Everything working, he needled his guitar a bit before turning back toward the drum riser where waited Flea, with his bass cocked toward the cavernous AT&T Center ceiling. Championship Spurs banners stood their ground. San Antonio screamed.

Facing off, less than a foot separating them, Frusciante and Flea noodled exploratory, looking down at their steel strings, then at each other, and back at Smith, who’d begun rumbling some made-up rhythm. The guitarists fell in, funk meeting nascent Kraut-rock, loping skank touching down cautiously. Toehold attained, off blasted the trio at full arena volume. San Antonio bled its vocal chords.

“Texas,” announced Kiedis, “this song was inspired by ZZ Top in the Eighties.” Iron Maiden couldn’t have produced Mother’s Milk in the guise of “Nobody Weird Like Me.” Metallic K.O. The Clash’s “London Calling” became “Right On Time,” a punk clamp down in effect on Frusciante’s flamethrowing “C’mon Girl,” whose extended midsection brought guitarist and bassist back together while the former interpolated Led Zeppelin into his solo. Other than seeing Jimmy Page absolutely shatter the Hammer of the Gods on his only solo tour, 1989, Long Island – “In My Time of Dying” – I'll surely never witness a more volcanic shredder live.

“Californication” and Roman sing-along “By the Way” cleaned up the collateral damage. Five minutes of blind roar followed. Will Ferrell will surely play Chad Smith in the movie, but the encore’s opening drum shakedown will require a stand-in for the cinematic re-creation. Call (King) Kong’s agent.

A last dose of Blood Sugar Sex Magik gunned the maniacal throng, Kiedis encoring by bounding down the stage ramp, being bundled up in a red robe, and whisked out an exit. That left Flea, Frusciante, and Smith onstage just as they’d begun the evening. Only this time, their 10-minute free jam eradicated everything that had come before it. Two hours of penultimate stadium arcadium (this tour leg ends tonight in Houston) all but erased by a trio absolutely hellbent on atomizing the AT&T Center in one final nuclear blaze of glory. We barely escaped with our lives. 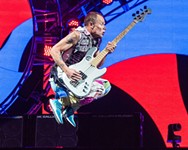 RHCP
Flea and company kill it 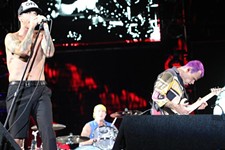