Catastrophe and the Cure

Explosions at the Hogg.

Last year, Feb. 26, they worried that Sigur Rós at Bass Concert Hall would be too … staid. Too controlled. Neutralized, compromised. That UT’s grand-sound cathedral, last bastion of symphonic and classical coagulation, would somehow suck the life out of Iceland’s snowcapped instrumental amalgam. Melt their glacial grandeur. If a show's seated, it must be a snoozer - waking hell for the somnambulant. Nothing could’ve been further from the truth. In that environment – no smoking, no drinking, no talking, nothing but sitting and paying attention, listening – experiencing Jon Thor Birgisson lead his crew through unexplored galaxies of guitar was like witnessing Roger Waters tear down the wall.

Explosions in the Sky last night, at UT’s Hogg Auditorium, was no less a natural wonder.

Seeing Austin’s preeminent sonic boom at Emo’s, all that thundering, all that tumbling brick and mortar, nothing could be finer. Tonight’s sold-out EITS massive attack there won’t be anything less than monumental. Its seated precursor, however, at Hogg, was singularly spectacular.

For starters, for the first time ever, I could watch Explosions drummer Chris Hrasky ram storm-heavy clouds together. Normally, across a great sea of unwashed heads at Emo’s, all you can glimpse is one of the group’s guitarists uncrouch momentarily and start thrashing upright. Michael James, who opens shows on bass but ends them with six strings and a bit of piano, he you can see, although he obscures Hrasky by standing in front of the drum kit. Guitarists Mark Smith and Munaf Rayani hunch over their equipment like Hendrix dosing his rig with lighter fluid. At the end of the night, there’s usually little to see simply because you can’t see it through the throng. Wedged into Hogg’s ancient, bony-assed seats, 1,199 students and one interloper sat stock still and held their breaths for 70 minutes as the local foursome let us watch, contemplate, and feel their force of nature. Sunday Night Lights.

Emotionally, material from EITS’ previous album proper, 2003’s The Earth Is Not a Cold Dead Place, still moves the greatest matter and mass. Show- and album-opener “First Breath After Coma” simulates rebirth in all its dawning glory, while album centerpiece and Hogg showstopper “Six Days at the Bottom of the Ocean” shakes this mortal coil’s life cycle. I personally experienced Easter this year a month early in that one performance. When EITS did back-to-back CD releases at the Parish for Cold Dead Place, the second packed out, but the first, wherein the band debuted the album in sequence – and played only that – got taken in by 75 of us at the most and remains one of my Top 10 Austin gigs of all time.

Tracks from the brand -new and no less emotionally charged All of a Sudden I Miss Everyone broke up the predominance of Cold Dead Place in last night’s set list, with “Catastrophe and the Cure” reiterating live what’s already been proven on disc: It’ll be a set highlight throughout the rest of the band’s career. So too will all of us there last night feel about this one special show: We were audience to something that comes around once in an ice age.

The set list then, as sent in by our man Chris Hrasky:

"First Breath After Coma"
"Welcome, Ghosts"
"Yasmin the Light"
"Six Days at the Bottom of the Ocean"
"What Do You Go Home To?"
"Catastrophe and the Cure"
"Your Hand in Mine"
"The Only Moment We Were Alone" 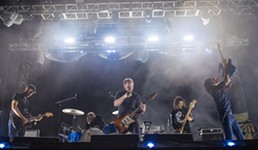 Explosions in the Sky, Hogg, All of a Sudden I Miss Everyone