Austin Powell debuts “Into the Void” with the Sword's Trivett Wingo

Into the Void … With the Sword

Into the Void: The Sword just finished a tour with Trivium, which draws a slightly different crowd than what you’re probably used to. How were those shows?
Trivett Wingo: The Trivium tour was a bit weird. It wasn’t really our scene, but overall it was okay.

ITV: Did you feel embraced by their fans? You’re style of metal is obviously a lot different than their Maiden-esque arena rock.
TW: We were embraced by some of them. I think Trivium fans and the Sword fans are two different breeds of animals.

ITV: How would you describe the Sword’s animal then?
TW: The Sword’s animal tends to be a little older, pot smoking, beer drinking dudes whereas Trivium fans seem to be a lot younger, pretty much 18 and under. It seems like it’s mostly kids that are into them.

ITV: There doesn’t seem to be any logical connection between the Sword and some of the bands you’re playing with. How is the Sword hooking up with a Swedish metal band like In Flames for a tour?
TW: There’s no real magic to it. We get bids or offers, our booking agent brings it to us, and we say yes or no. I’m not sure where the idea always originates.

ITV: Both Trivium and In Flames are Ozzfest veterans. Does the Sword have any interest in taking a similar summer venture?
TW: Categorically, we pretty much avoid any big festivals like that. Really, we don’t like to play shows where there are more than four bands on the bill, so Ozzfest is something we probably wouldn’t do, at least not now. There seems to be a push in the metal world to pack as many bands into a single bill as possible, but we don’t want anything to do with that.

ITV: Is it death by association that you worry about? Does the Sword not want to be affiliated with certain metal bands?
TW: To a degree, you don’t want to be lumped in with too many phrase name bands, but more importantly, we just enjoy what we’re doing, playing shows the old fashioned way. And, something about those big package shows just reeks of commercialism. We don’t really want to be presented like that.

ITV: Next thing you know Sharon Osbourne is heaving eggs at you on stage …
TW: I mean honestly, who really wants to watch 15 or 20 bands? Who wants to pay to see that many bands when there’s only three or four you’re interested in? It just seems like the quality is being made up for with the quantity.

ITV: I think in some sense at least, it’s a reflection of this younger generation, this ADD/MySpace audience that’s used to getting everything musical so quickly and easily that it just makes them want to hurry up and get more.
TW: Right. Ideally, the people we play music for just want to stand there and listen. It’s not about some texture of sound that you can mosh to, not that there’s anything wrong with that, but that’s just not us. I’ll tell you what I just absolutely detest: I went to go see the Melvins recently at Emo’s and I was just standing there trying to enjoy this amazing band that I grew up listening to, in this ultimate moment of sorts for me – seeing the Melvins with Big Business setup with two drummers – and this dude just starts slam dancing in front of me, elbowing my girlfriend and shit. I was having a pretty good time until this drunken idiot just starts flailing around. That’s not how we want our shows to be. We like to think of ourselves as more of a classic metal band, with more of a rock & roll connotation to it.

ITV: What did you think of the Melvins’ cymbal synthesis?
TW: I thought it was amazing, one of the best shows I’ve ever seen despite the aforementioned idiot. I think it had to do with how long it had been since they had come around. People showed up when the doors opened and just started getting wasted, so by the time the Melvins played it was just unruly. People were actually throwing shit at Big Business. I don’t know what peoples’ deal is, but they need to chill out at shows. I’d heard the recording with the two drum tracks, but I never thought I would see it live. They totally pulled it off.

ITV: I was amazed at how well the Big Business bassist Jared Warren fit in vocally and rhythmically with the Melvins. His harmonies make some of the old Melvins sound a bit empty in retrospect.
TW: Totally.

ITV: What would be the ideal four-band line-up then for the Sword?
TW: Is this a fantasy thing? Do they have to be living?

ITV: Yeah, they have to be able to actually play together.
TW: Let’s see, Page and Plant, Heaven and Hell [Black Sabbath with Dio], and Clutch.

ITV: Does the Sword have any touring essentials?
TW: That’s hard to say. We’re pretty work-oriented and stripped down. We just get out to the show and do it. In terms of entertainment, just a couple of iPods really. All we do is listen to music.

ITV: What have you been listening to lately?
TW: Let’s see, right now in my CD case, which would be pretty reflective of what I’m into right now, I’ve got the Melvins’ [A] Senile Animal, Led Zeppelin’s Physical Graffiti, a Big Business Tour EP, and the Whip. Have you ever heard the Whip?

ITV: No, I haven’t.
TW: It’s the band the bassist from Big Business used to be in with the drummer from Karp, who passed away. That was an amazing band. They just had this one single that I listen to over and over. It’s incredibly good.

ITV: The last time the Sword was at Emo’s the band played a new song called "Sea of Spears." Are there any plans to record in the near future?
TW: Not really. We’ve got a lot of touring on our plates for the first half of the year. I think people can probably expect a new album in early ’08.

ITV: Seriously?
TW: We’ve been touring pretty doggedly since before the record even came out. There’s only been a few months total that we’ve been home and that time is usually spent recovering from the previous tours and planning for the ones that are coming up. There hasn’t been a lot of time to write, but I think we’ll start setting some time aside soon and getting that under way because people are already starting to ask about the second record. 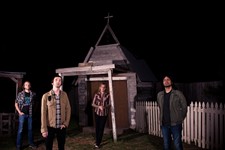 The Sword’s John D. Cronise Discusses Decision to End Influential Metal Band
“I realized I couldn't do another album”