When the spicy dust is clear, only one will be left standing

Never mind the whizzbang atom-smashing apparatus at CERN or the star-craving mad technowizardry of SpaceX, the people behind Männkitchen want you to regard their so-called Pepper Cannon as the apex of machine evolution. 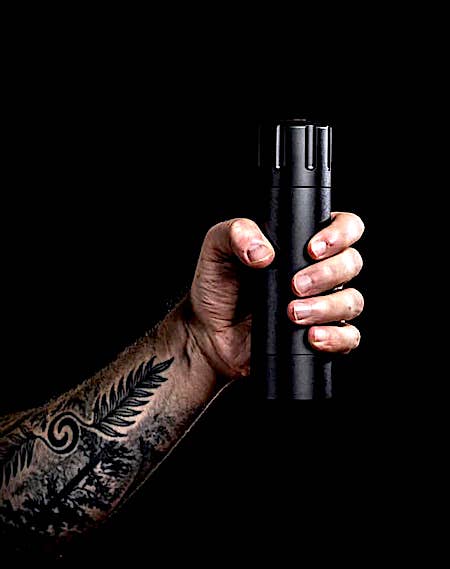 In this corner … the Männkitchen Pepper Cannon!

This kind of hype, from a project that was funded via Indiegogo?

And Cleve Oines, who founded the company and runs it with his wife and has been carving a gleeful cheffing swath through kitchens since he was knee-high to a chapulina, he also has a dedicated publicity team who hawks his wares to food writers and influencer types and offers those media-mongers a Pepper Cannon, gratis, to try out for themselves.

To see if they can deny the kitchen tool’s goodness. To see if, maybe, they might even sing a little hosanna of praise about how good the thing is.

I mean, I got that pitch a couple months ago. Because I get a lot of those pitches – especially ’round this time of year – because I’ve been the Chronicle’s Food Lieutenant for a while now and I’m on a list somewhere. Probably several lists. And, at this point, I’ve had enough. Unless it’s something previously unheard of that I figure is gonna blow me away with its brilliance or somehow reveal the winning lottery numbers, I don’t care if it’s free. Because my kitchen already has everything it needs and there’s a gang of deadlines massing on the horizon and I don’t have the time to churn out another little blurb about whatever it is, get me?

But, no, of course I don’t respond that way. I’m a professional. More often than not, I’m polite as fuck.

And, all things considered, this Pepper Cannon was intriguing. It looked gorgeous, for one thing, and it seemed potentially … useful?

So I wrote back to the publicist.

“I’ll be glad to test drive that Pepper Cannon from Männkitchen,” I told her. “But, look, I’m not just gonna give it a happy little shout-out somewhere. Because I happen to have this, well, I call it The Horse Leg? It’s this big wooden peppergrinder that’s about the size of a horse’s leg – thus the name – and I found it in the street outside an old girlfriend’s house years ago, and I love using the thing, and it’s already a better grinder of pepper than I’ll ever need. So I’ll put your Cannon up against The Horse Leg, I’ll compare the two of them with gimlet-eyed scrutiny, and we’ll see what’s what, okay? We’ll see how good this Männkitchen thing actually is. I’m expecting disappointment.”

And, after that, I reckon the publicist didn’t just file the usual request-for-shipment.

No, she must have forwarded my letter, verbatim, to Oines or one of his minions in charge of fulfilling orders. Because when I got the receipt for delivery, there was a personal message typed into the little space for personal messages. The message was: CHALLENGE ACCEPTED.

The goddam hubris, you know what I’m saying?

The temerity of this Männkitchen.

Because by now I’ve tried the Pepper Cannon. I’ve used Männkitchen’s sleek, stainless steel, lightsaber-handle of a spice-grinding tool to turn black peppercorns into a fine, sprinkleable flavor enhancement for meats and soups and salads, meal after meal after meal. I’ve gently stroked the Cannon’s smooth and shiny top, turned it once, maybe twice, and had emerge from its other end a more consistent, more voluminous shower of pepper than I’ve ever experienced from any other grinder.

This is no battery-operated gizmo, mind you: There’s nothing electric about it. It’s a simple, old-fashioned, hand-powered pepper mill that just happens to look like a million bucks. So – why does it do such a good job?

Listen: “Ordinary mills can only grind pepper in the 12-28 mesh size range. The Pepper Cannon can grind from 8 all the way past 60 – coarse enough for stocks and roast beef, and finer than the pre-ground pepper you’ve been forced to buy because your mill wasn’t up for the task. A double-bearing-supported drive shaft that powers high-carbon stainless steel burrs ensures you get the best grind, every time.”

That’s quoted directly from the description on the Männkitchen website. And I don’t know – I’m not an engineer – I can only accept the pure veracity of those statements, because they explain why my own experience with this Cannon was, and continues to be, so thoroughly smooth and enjoyable and, above all, effective. At whatever coarseness of grind I choose.

The Pepper Cannon is, it turns out – ah, I almost hate to say it – it’s a brilliant intersection of culinary practicality and product-design elegance.

It does cost $200, yes. Which, in these uncertain times, can seem like a lot to spend on a bit of foodie apparatus. But –

I mean, look: I’ve put The Horse Leg in the garage, okay?

I’ve relegated The Horse Leg to a car-adjacent shelf that holds all the other household objects that are no longer necessary but for which I maintain a certain sentimental attachment. Because I just – I just can’t bear to part with the thing. And it’ll stay out there, unused, until my wife, who can’t abide clutter, convinces me that it’s time to Let It Go Completely.

That old Horse Leg will stay in the garage, because there’s no reason to use it ever again.

And, tbh, it’s not even fit to share a kitchen countertop with my lovely, solidly made, exquisitely functional Männkitchen Pepper Cannon.