Adult Beverages From Around the World to You

You know we feature local booze whenever we can here at the Austin Chronicle, but damned if we’re going to ignore everything else on the planet. Especially in this season of gift-giving, there are plenty of quaffable spirits out there – beyond the blue horizon, like – that you’ll want to be aware of. Here are five of them:

1. MR. BLACK You know how there are some animals that are kinda dangerous, but the Australian versions of those same animals will pretty much kill you dead? The Sydney funnelweb spider, the eastern taipan, the blue-ringed octopus, and so on? Well, there are a lot of different coffee-based liqueurs in this world, but, as if craft distilling were recapitulating the flexes of nature itself, what’s very likely the best one of all comes from Australia: Mr. Black, that masterful blend of cold-brewed Arabica coffee and locally sourced wheat vodka, brings a powerful java taste without any cloying sweetness to thwart enjoyment, making for the finest of darkling martinis, the least barbarous of White Russians, the – listen, gourmand, what you really want to do after a fancy dinner is pour some Mr. Black, just by itself, over a scoop of vanilla ice cream and send your dessert-craving taste buds to paradise.

2. CASA DRAGONES This small-batch tequila brand, begun in San Miguel de Allende in 2009, has just released its fourth expression: The first tequila rested exclusively in Mizunara, a rare oak native to Japan and traditionally used for aging Japanese whiskies. The company’s CEO – and Mexico’s first official maestra tequilera – Bertha González Nieves worked with Japan’s only independent cooperage to produce new casks of 100% Mizunara with a custom char for resting their new reposada in, and the result is a spiritual (or at least spirit-based) revelation in subtle influence. It’s fitting that the House of Dragons would elevate their 100% blue agave distillations with staves sourced from the land of the rising sun, that the potency and flavor of this Casa Dragones Reposado slides in like a liquid ninja to carry out its mission of refined refreshment.

3. SELECT APERITIVO Venice’s Pilla Brothers created Select Aperitivo back in 1920, which means that it’s now been around for more than a century. The only thing you need to do when you produce an aperitif of herbal bitters, the only thing you need to do, whether you’re in post-war Europe or anywhere, is to make it brilliant at the start and then not let its goodness diminish as time goes by. Right? So, here we are, 100 years in the Pilla Bothers’ future, and damned if Select isn’t still the international trendsetter – in as much as the trend is quality and refreshing flavor. Suggestion: You want a cocktail hour or garden-party spritz that’ll bring your guests and yourself a world of enjoyment, you’ll pair this Select with a favorite Prosecco and watch the smiles bloom on every sipping mouth. But, tbh, some people – your current reporter is among them – prefers it straight and on the rocks, thoroughly chilled for thorough chilling.

4. AMARO MONTENEGRO Does Select’s century-deep history make that abovementioned tipple seem like a, what do the kids call it, Original Gangster? Mmhmmm. What about an Italian herbal liqueur, an amaro, that was first concocted in 1885? Yeah, that’s a braggable stretch of chronology. Amaro Montenegro’s recipe is still based on its original secret blend of 40 botanicals – including vanilla, orange peels, and eucalyptus – and its terminus is a faintly burnt-orange tasting elixir whose components have been boiled, macerated, and distilled toward an apotheosis of distinct pleasure. It’s got an ABV of 23%, this long-storied digestif, and it’s an especially appropriate endnote to a night of pasta and rich (or what former Chronicle Food editor Brandon Watson would surely call “unctuous”) sauces. Or, hell, it’s perfetto any time you’d like a bit of oldschool elegance in your daily journey-of-imbibing. Like, now? How about right now? Salute! 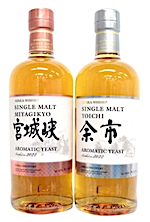 5. NIKKA WHISKY On the other hand, Nikka Whisky has been around since only 1934. If not for Mr. Black and Casa Dragones blurbed above, the acclaimed distillery would be this list’s new kid on the block. Still, though, that’s just short of 100 years, which provides much history for revisiting – which is what the brand’s “Nikka Discovery” is all about. Nikka has been releasing a trilogy of expressions, each highlighting a different part of the whiskey-making process they’ve long practiced, offering an inside look at the various experiments within their two distilleries, Yoichi and Miyagikyo, in Japan. This year’s release, the second of the “Nikka Discovery” series, focuses on the variety of yeast within Nikka’s two distilleries and the unique aromas that are generated through fermentation. “Single Malt Yoichi Aromatic Yeast (48% ABV) is reminiscent of ginjo sake, expressing floral and fruity notes that have only improved after several years of maturation. Similarly, Single Malt Miyagikyo Aromatic Yeast (47% ABV) offers the fruity aroma of stone fruit such as peach and apricot, which enhances Miyagikyo’s traditional elegant and fruity style.” We’ve sipped, we’ve sampled, we concur – and are, just a little tipsily, impressed. Note: Bottles go for around $275, with only 2,640 bottles of both expressions available in the States – but also online. For you completists, also note that next year will bring the third and final Discovery release, in anticipation of the company’s 90th anniversary.

WUXTRY! THE FINNISH LONG DRINK It’s a popular category of alcohol in Finland, where the roots of long drinks go back to the 1952 Summer Games in Helsinki. The country of only 4 million people was still recovering from World War II, see, so, concerned about how to serve drinks quickly enough to all the visitors flooding in, the government commissioned the creation of a new liquor drink that was both delicious and fast to serve. Now this national legend has been brought to America, and the newest expression of the brand is – just in time for these winter holidays – resplendent with cranberry. Resplendent, we say – and refreshing enough to power a team of reindeer (or you, citizen) through the harshest winter.