Take a Walk on the Wild Cider

Apples and bees, right? Pretty much nature at its best – even moreso, for the drinking classes, when those components of the unfabricated world are used to create refreshing imbibables unlike any other. 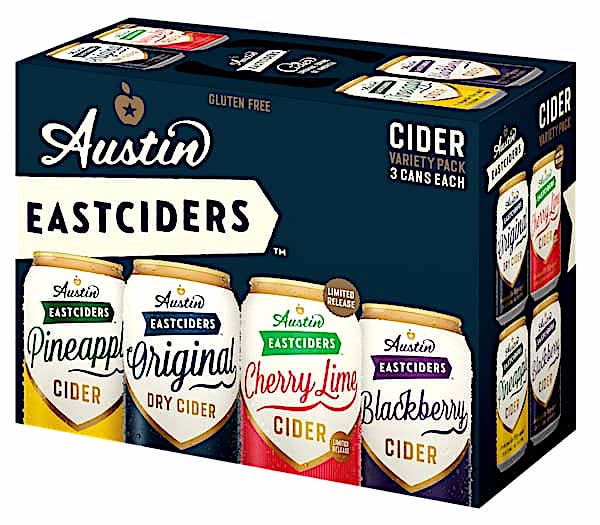 Locally, we’ve got ‘em. We’ve got ciders made from the sweet, crisp apples of Texas and beyond. We’ve got mead made from only the very finest of bee vomit (although of course we’ve been calling the stuff “honey” for a long, long time).

Texans, ever a thirsty bunch, are not going to be caught empty-flagoned when it comes to these two types of liquid refreshment, tell you what.

If we start with the ciders first – oh, let’s – then we’ll start out with Austin Eastciders, because Eastciders has that convenient Collaboratory of a tasting room at 979 Springdale with an array of their expressions on tap; it’s also here they debut their more exciting variations and always have their classics on tap and perfectly chilled for your enjoyment. And because, as if that weren’t enough, they also have that larger, relax-and-dine-and-drink restaurant at 1530 Barton Springs Road. But those places are, ultimately, just the direct-to-public epicenters (a much more pleasurable experience, we suggest, than merely snagging a sixer of cider from the nearest H-E-B) and not what the Germans would call the ding an sich: The thing itself. That is, of course, the cider. And Austin Eastciders, since transplanted British cider aficionado Ed Gibson joined forces with businesscritter Mark King to start the company around 2012, has long had the necessary process and techniques down cold. That’s why they’ve flourished as quickly as they have, nigh on conquering the market locally and making bright, apple-licious inroads all across the nation. And now, after 10 fierce years, they continue to hone their skills and flex into new areas of taste and variety. Witness, for example, their most recent gambit: Austin Eastciders x Mike’s Hot Honey. Sounds like it’d be the best of both worlds, right? That’s what we thought, too. But then we tried it, and were … even more impressed. We were unfamiliar with Mike’s Hot Honey – we still haven’t enjoyed the stuff all by itself – but it turns out, at least under the wise calibrations of these cider savants, to be just sweet enough and not too damned hot. You know? Like how some idiots think it’s soooooo fucking cool to chew a mouthful of raw Scotch Bonnets because, after all, they’ll never do another noteworthy thing in their entire pathetic lives? Yeah, no, this Mike’s Hot Honey Cider from Austin Eastciders, it doesn’t set your thirsty mouth on fire; it merely leaves the faintest tingle around your tongue and gums after the honey’s imparted a subtle pepper flavor to that perfect blend. (Oh, and? That earlier pepperified Eastciders variation, the limited-edition Pineapple Habañero collab the company did with Yellowbird a while back? That was a skoshie hotter, yes – bc habanero, duh – but it also didn’t destroy your palate via capsaicin attack.) We reckon it’s careful and flavor-forward strategies like these – amplified by an excellent graphic identity – that continue to increase the appeal of this already popular brand.

Shining among the cider choices in this town is the excellent Apple Bomb produced by Argus Cidery (12345 Pauls Valley). This, of all the varieties, is their best-known (and best beloved) brew, described as “a classic English pub-style cider: dry, fruit-forward, and tannic.” [Note: We may have added an Oxford comma there; don’t get us started.] These serious cidermongers – led by Wes Mickel, who made his first cider while still in high school(!) – have been rocking this town with quaffables since 2010, but had to shutter operations for a couple of years – bit of a pandemic there for a while, you may recall – and now, with the assistance of the beery champions at Thirsty Planet, have returned to wet the happiest apple-craving whistles everywhere.

Moontower Cider’s Benjamin Weaver is all about reclaiming the illustrious history of cider in this country. “We believe that well-balanced cider goes beyond being dry or sweet,” as it says right on the website. “There’s a reason that cider long held a role as America’s drink of choice, and we want to help reassert its rightful place by making a well-balanced, accessible drink for anyone to enjoy.” Well, they’re definitely making that sort of drink, over there at 1916 Tillery, not too far from where the newest expansion of Tatsu Aikawa’s empire is preparing to bring in the barbecue-craving crowds. Moontower has been leveraging the synergy of apples and fermentation since 2017, and their current offerings – the straight-up-apple Semi Dry, the wine-inflected Pomme Blush with its addition of cabernet grapes, the slightly honeyed Miel, and their new Perry – are delicious evidence of what a combination of passion and professionalism can bring into the world of beverages. Also, we – what? Perry? Oh, c’mon, you know that’s like cider except it’s made from pears, right? It is, and it’s amazing. Hell, it’s also why fine-dining emporium Perry’s Steakhouse is currently offering their fresh take on a martini that’s – oh, well, that news is for a separate post.

Texas Keeper is out in the part of Austin that’s so far south it’s actually Manchaca, but it was started by three longtime friends – Nick Doughty, Brandon Wilde, and Lindsey Peebles – who were all born and raised in Austin. Hell, you want local? How many other people on this list, how many other people reading this article, were actually born and raised in the ATX? But, ah, that’s totes beside the point, isn’t it? How good are these ciders, is the point. How delicious is Texas Keeper’s 2022 TX Cuvée: Rubus Forager, with “all Texas fruit – Arkansas Black and Granny Smith apples from the High Plains – co-fermented with dewberries hand-foraged from Free Fleeing Farms,” or their 2021 Moonlight, with those double-fermented Northern Spy and Rhode Island Greening apples, the cider then aged for 10 months in freshly emptied Chardonnay barrels, or – really hella delicious, is the answer. And those and all the other variations await you only after you get past (because we doubt you’d ever get tired of) their flagship Texas Keeper No. 1. And you say you’re seeking a good tasting-room chill spot, a relaxing taproom experience for your cider-drinking aspirations? Then visit this place at 12521 Twin Creek Road out in Manchaca, friend. Because, with its outdoor patio in the midst of live oaks beneath the big blue sky, it’s where you can bid your quotidian cares and woes adieu.

And now, after that quality quartet of appletizers, on to meads!

Or, to be specific, on two meads:

Ah, we love what Meridian Hive does, and we’ve loved it from the very beginning. In cans, in bottles, in a variety of containers and a panoply of stunning flavors, what’s brewed up by this crew, producing the elixirial end result of apiculture at their new 8201 South Congress headquarters, is refreshment itself. Which is why the Hive’s “hard honey” and its retail availability is unmatched in this city – it’s sold pretty much everywhere fine beverages are – and yet, not content to toe the established mead-and-melomel line, these honey-happy honchos continue to diversify deliciously: Check out, for instance, their lower-calorie Skinny Bee brews. 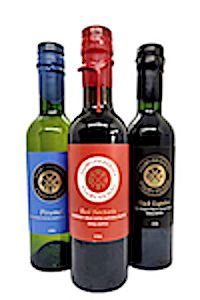 Elgin Meadery leans into the ancient beverage’s heritage with their very name, by referring to their Tasting Room & Mead Hall, and by featuring brand typography that wouldn’t be unfamiliar to any of Geoffrey Chaucer’s crew or, like, the Riders of Rohan. And damned if these Elgin meads aren’t excellent for slaking a Texas thirst, for celebrating a solstice or an equinox, for tossing back after any long day of defending the demesne, constructing a castle, or doing battle with some infernal software army. But – does that mean Elgin Meadery is stuck in the past? No! You want innovation among the classics, mead-lover? Try that Black Lupulus of theirs, for example: “We dry hopped this tart black currant melomel with citra hops to enhance its already citrusy profile.” Mmhmm. Elgin Meadery isn’t resting on any Renaissance laurels; but, if they keep up this sort of bold exploration, they may wind up making adult-beverage history.

On the other hand – perhaps Someone's red right drinkin' hand – if you seek a round-up of even harder hooch that's local, you can find that here.