The Central Market Cooking School is Alive and Well and Real, Real Tasty

So here’s the Central Market Cooking School, back in culinary action after that little pandemic situation we all suffered through for a while. Ready to learn how to make sushi, how to pair saké, how to imbibe both? This table is where you want to be.

OK, yes, we’re still dealing with the dregs of COVID-19, aren’t we? But now there’s … there’s much more light than there is tunnel, you might say.

And now here’s the Central Market Cooking School, located on the second floor of the (familiar and always welcoming) Central Market emporium at 4001 N. Lamar, and, oh, how we’ve missed it!

That upstairs classroom with its fully functioning kitchen and state-of-the-art video equipment is a clean, well-lighted place, to cop Hemingway’s phrase – but any writers you’re likely to encounter there, if any at all, will be more along the lines of M.F.K. Fisher.

Teaching writers, that is – those multitalented gastroscribes responsible for bestselling cookbooks and so on. Because learning writers, people who are there to glean new knowledge and skills from the school’s instructors? That could be anyone. That could be your current reporter.

“Just a scribbler with too much drink in him,” as expatriate American journo Holly Martins, played by Joseph Cotten in The Third Man, referred to himself – remember?

I didn’t have too much drink in me, at the last class I attended at Central Market along with several other skill-seeking citizens. I had just enough drink in me – two kinds of saké, to be precise – as I shaped rice and finessed veggies and raw fish and seaweed into palatable, visually attractive configurations in the most recent Sushi & Saké Party, led by longtime Central Market cooking instructor Sydney Dow. Yes, Brenner made this. If his clumsy hands can learn how, so can yours.

It was the first hands-on class I’ve been to there. In the past, in the Before Times, as covered in various Chronicle articles over the years, I’ve attended classes where the guest chef cooked the meal before our eyes, showing us their techniques step by step, explaining the whats and the whys of how the ingredients must come together – and, of course, at the end of the presentation, all the students get to feast on what was prepared.

But this time, this class I took just last month, it was one of those you’re-right-in-there-doing-it-yourself instructionals, lubricated by the delicious saké pairings, engagingly guided by that Syd, and it resulted in several different sushi rolls built from fresh tuna (and salmon and finely sliced vegetables and sheets of nori) – and everyone there had, it seemed like, one hell of a good time. And, as we practiced our (initially tentative but increasingly confident) skills and then snacked upon the results, one hell of a good meal.

I mean, nobody there was going to put Tyson Cole or Yoshi Okai out of business, you know?

But: Wow, I thought, I made this.
And: Oooh, it tastes real good.

I recommend this class to anyone who wants to learn, to start out learning, how to make sushi. But I also get to point out that the affable chef Syd specializes in Asian cuisine in general – and that there are other such classes, beyond sushi, at the school. And there are other Central Market instructors, too, of course, with learning opportunities representing foodways from all over the world. 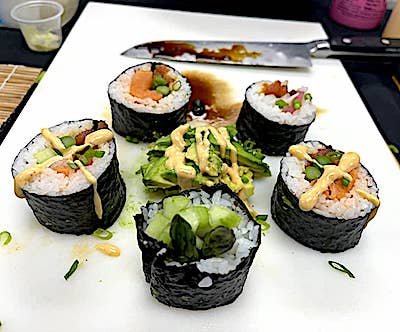 A little short of perfection, perhaps, but a personal triumph and hella tasty.

Also, as C.M. Cooking School manager Vance Ely noted, things are just now ramping back up – and, soon enough, the regular schedule of classes will be supercharged with visiting celebrity chefs hawking their cookbooks, sharing their hardwon wisdom, and preparing excellent meals while you and your classmates 1) watch and then 2) eat.

And, finally, here’s the thing, the bottom line, the fact that seals the deal for yours truly: You go out to eat somewhere decent, the occasion’s gonna cost you about as much as one of these classes will – and you won’t have learned a damn thing.

You get what I’m saying?